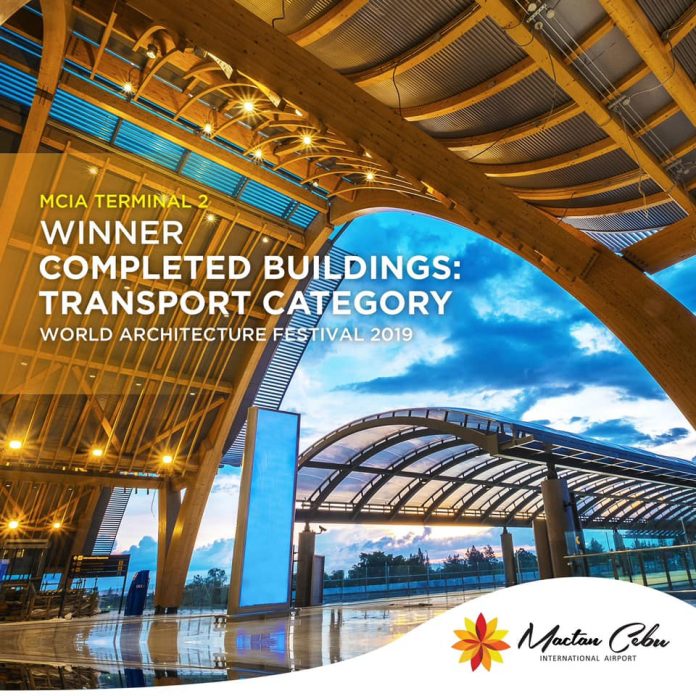 One of the country’s Visayas-based airports once again earned a prestigious recognition; this time, from an international award-giving body focused on the architecture and development industry.

Calling the building’s design “simple and elegant,” the judges commended the use of locally sourced materials, and its strategic location, with the aid of a local hub and a landscape plan. As for the interiors, the experts noted the light and uncluttered atmosphere.

The judges said that its popularity in the local community has inspired memorable travel experiences among tourists.

The management noted that the recognition is a big win for all the Cebuanos and the Philippines. They also thanked the public for helping make MCIA the Philippines’ resort-airport.

Happening annually, WAF is a prestigious event in the architecture and development industry. Since 2008, it has been recognizing world-class buildings, such as the Saigon House in Vietnam, Fulton Center in the United States of America, and the Chinese University of Hong Kong in Hong Kong. Winners of the awards are categorized into different groups: Civic and Community, Display, Culture, Education, Office, Sports, Leisure-led Development, and Health, among many others.

This year, there were over 148 judges representing 68 countries, according to the festival’s website. The jury pool is composed of architects, urban designers, professors, and architecture editors and writers.

While the recent international recognition is certainly a huge feat for the country, it’s worth noting that MCIA has already been taking the global spotlight in the past years. Back in 2017, the airport was applauded for its excellence in airport marketing, garnering an award from Routes Asia, as reported by SunStar. At the time, the figures showed that the airport was attracting four million to 20 million passengers every year.

The awards event was created in 1997, aimed at acknowledging the good work of different organizations in promoting airports and destinations. Routes Asia hopes to encourage airports to improve and expand their services further.

Meanwhile, in 2018, MCIA was named “Asia Pacific Medium Airport of the Year” by the Center for Asia Pacific (CAPA) Aviation Awards, according to Manila Bulletin. On its website, CAPA’s goal is to acknowledge airlines and airports for their success, and more importantly, their industry leadership in coping with the changing times.

President of GMR MEGAWIDE Cebu Airport Corporation (GMCAC) Louie Ferrer attributed MCIA’s success on cultivating its community. Partnering with the government and the private sector while concentrating on strategic airline marketing efforts enabled them to improve the Queen City of the South’s connectivity and passenger traffic.

True to embracing the local community, MCIA remained committed to their city’s island-resort image, in the midst of other airports showing off glass and steel structures. The building’s architecture has elements resembling waves and boat hulls.

MCIA’s rehabilitation was one of the flagship projects of the present administration’s Build, Build, Build program. It was in 2018 that the second terminal was inaugurated, as the Philippine Information Agency reported. Its construction began in June 2015, targeted to decongest the airport and increase the annual passenger capacity from 4.5 million to 12.2 million.

In the recent report from Manila Bulletin, there were 64 airport projects that were completed in the infrastructure development program, while 133 more are ongoing. Tacloban Airport and Ormoc Airport are among those that were modernized and rehabilitated.

The former’s expanded passenger terminal building was launched in 2018, which increased the total area to 1,100 square meters and added 275 seats to the departure area, according to Business World. The latter, on the other hand, was inaugurated in July this year, with a rehabilitated passenger terminal building, new administration building, and improved perimeter fence, as reported by the National Economic and Development Authority.

Meanwhile, Bohol-Panglao International Airport was launched in November 2018, and tagged as the country’s first eco-friendly airport, as it has a sewage disposal system, solar power system, and rainwater catchment system, Rappler reported.

Palawan to Become a Cruise Destination with Its Port Under Development