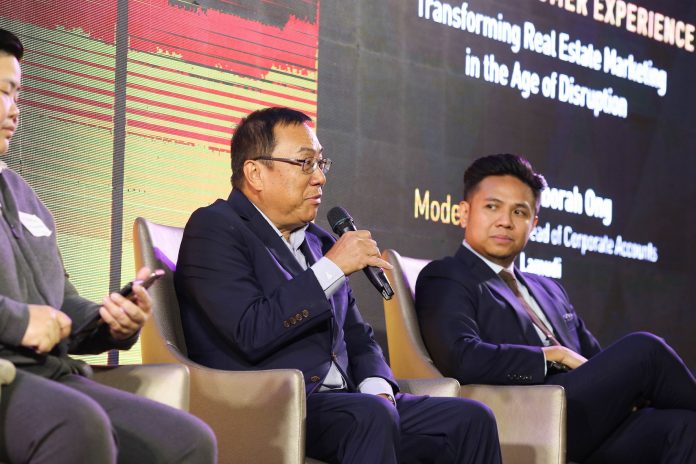 For the past three years, The Outlook by Lamudi has celebrated the successes of different prime developers, key persons and real estate projects scattered throughout the Philippines. Last November 14, 2019, one of the key figures recognized at The Outlook Awards 2019 was Jose “Joe” Soberano III, current CEO and chairman of Cebu Landmasters Inc., as the Personality of the Year.

Joe graduated with a degree in AB Economics from the Ateneo de Manila University in 1976. He also completed the Strategic Business Economics Program at the University of Asia and the Pacific. Joe also became an alumnus of the Harvard University Graduate School of Design after completing the Advanced Management Development in Real Estate in July 2015.

After obtaining his bachelor’s degree, Joe worked for the Ayala Group of Companies, the oldest and largest conglomerate in the Philippines. His work experience includes years at the Bank of the Philippine Islands and Ayala Land Inc., where he gained most of his knowledge and experience in real estate development. Part of working with Ayala Corp. led him to be one of the pioneers of Cebu Holdings, the Ayala Land subsidiary in Cebu City, where he led various projects on horizontal and vertical developments.

Joe’s background in finance and his comprehensive training in real estate developments were the foundations for the establishment of Cebu Landmasters Inc. in 2003.

The Man behind Cebu Landmasters Inc.

Employing his extensive knowledge on real estate development, Joe founded Cebu Landmasters Inc. in 2003. Starting with two employees, the founder and current CEO being one of them, the company’s first project was the San Josemaria Village in Balamban, which aimed to cater to Filipino workers around the area. In the subsequent years, San Josemaria Village branched out to other areas in Cebu, a milestone that catapulted Cebu Landmasters into one of the prime developers in Visayas and Mindanao that seeks to provide affordable, mid-cost quality homes.

Since its establishment, Cebu Landmasters has risen from its humble beginnings into being the top choice developer by seekers and brokers across Visayas and Mindanao.

Cebu Landmasters has also ventured into developing commercial hubs, namely the Cebu Business Park that houses the Latitude Corporate Center, a highly distinguished office building launched in 2016. In the following year, Cebu Landmasters widened its reach by launching its first New York-inspired masterpiece, 38 Park Avenue in Cebu IT Park, which is another commercial project led by the CEO and chairman.

Throughout the years, Cebu Landmasters has expanded its market not just in Cebu City, but also in Mandaue and in Bacolod. With the increase in its real estate market and its growing portfolio, Cebu Landmasters’ primary goal is to provide homes, accommodations, and office spaces that are accessible and affordable for the majority of Filipino families. Additionally, the company’s goals of making better lives for Filipino workers and OFW families are one of the key aspects that garnered Cebu Landmasters the Outlook 2019 awards of Best Developer of the Year – Visayas and Mindanao, and Best Affordable Condo of the Year – Visayas and Mindanao for Casa Mira Towers Labangon.

Dealing with Changes and Risks

As one of the panelists in The Lamudi Real Estate Conference 2019 held last October 17 at the Makati Shangri-La, Joe participated in the session titled New-Age Customer Experience: Transforming Real Estate Marketing in the Age of Disruption, where he admitted to not being a “techie.” Joe pointed out that instead of letting this impede the growth of his company, he said that he “calls in the young guys” in order to deal with the technological shifts in the industry.

Joe said he encourages his people, including himself, to ”keep on reading, and find out how best to reach out.” He emphasized the importance of learning from one’s mistakes, and gaining knowledge from the process, thus improving along the way.

In an interview with Lamudi, Joe talked about taking risks and looking for opportunities in real estate. He asserted that despite owning properties that do not sell out or do not turn out to be according to his development plans, real estate is the best “neutralizer” of investment in the sense that it does not depreciate. The thing about land is that its value increases over time, especially when it is in the right location, and depends on what one’s “selling push” is, according to him.

Finally, Joe highlighted the importance of looking for opportunities in one’s failures. Learning from his mistakes made him a better leader in the field, as he was able to address issues more effectively, and made him cautious about not replicating these mistakes in the future.

The Epitome of ‘Cebu’s Pride’

In addition to garnering awards from prestigious events and being recognized as one of the leaders in the real estate industry, Joe has also been an integral part of Cebu’s economic growth and of the Cebuano community.

Prior to being CEO and Chairman of Cebu Landmasters, Joe played a vital part in developing prime commercial centers in Cebu, namely the Cebu Business Park and Cebu IT Park. Joe currently serves as president of the Rotary Club of Cebu and of the Chamber of Real Estate Builders Association (CREBA). In relation to Cebu Landmasters’ goal to provide affordable, top-caliber homes for Filipino workers and their families, Joe also serves as Chairman of the Board at the Center for Industrial Technology and Enterprise (CITE), an institution that targets to give technical training to the less privileged youth.

Joe’s recognition as Personality of the Year during The Outlook: Philippine Buyers’ Choice Property Awards 2019 reflects the CEO’s staunch involvement in his hometown’s growth, and in addressing the needs of many working-class families. He repeatedly accentuates what real estate should be; it is about filling the need of the people, primarily those in the middle-income group.

Being the leader of Cebu Landmasters, Joe imparts his wisdom, other than his extensive knowledge in real estate, to those aspiring for success. “I would say to look at your capabilities, and try to match that with the opportunity that you feel very strongly [about]. That will be a very perfect combination to move forward,” said Joe in an interview during The Outlook Awards 2019.

“But of course we don’t have to be too ambitious about it, because if you’re starting off, you have to feel your way and move one step at a time,” he added, regarding the gravity of patience in finding your way to reach your goals.

“There might be setbacks, there are going to be obstacles and debacles along the way, but you have to persist.”

Joe also shared his central life lesson that brought him to where he is right now: “Overall, you just have to have the best intentions on what you’re doing.”

Joe mentioned that creating homes is about delivering a commitment to buyers, and that providing homes also entails improving the community.

“It’s not more of what you can gain out of it, but having that impression that you are providing goodwill to where you are. With that kind of mindset, I think things will flow for the better, not just for yourself, not just for your organization, but to the community that you have given service.”

Lastly, Joe talked about the key people behind his success. He noted that his family, the people comprising Cebu Landmasters, and his former bosses all played integral roles in the success of the organization, and its service to the people.

Check out Lamudi’s The Outlook E-magazine for more articles about trends to watch in the industry. For more details about The Outlook 2020: Philippine Buyers’ Choice Property Awards, visit lamudi.com.ph/outlook2020.

Iloilo: A Prosperous Center of Trade in Western Visayas

Condominiums in the Summer Getaway Spot of Tagaytay

Work-Love Balance: How This Couple Succeeded in Work and in Love Together

Loving without Limits: A Nurturing Place for Children under Street Situations

Life at its Most Convenient: The Pillars of the Microtownship Lifestyle

Love Should Make You Feel at Home