Solid Townhomes is a subdivision in Bankal, Lapu-Lapu City.  Its entrance is along the General Aviation Road. This development is filled with two-story townhomes.

Why Solid Townhomes is Perfect for You

The houses for sale or rent in Solid Townhomes are perfect for families that want to step up from renting to owning property. Townhouses generally cost less than detached homes upfront. They share a wall with other houses, so their lot sizes are significantly smaller than single-family homes. These factors all contribute to the low price of a lot of townhouses.

Solid Townhomes in Lapu-Lapu have various amenities and features that you’d expect from a modern subdivision.

If you’re a frequent flyer, Solid Townhomes is for you. The Mactan-Cebu International Airport is just across the street! You can easily access it from the General Aviation Road. The drive takes 20 minutes or less, depending on the traffic conditions.

A notable feature of this subdivision is the landscaping. There are trees next to some of the sidewalks and in front of the houses. There are also plants surrounding the interior side of the perimeter fence. Even if the residents live in the highly urbanized city of Lapu-Lapu, they still get to be close to nature.

Lapu-Lapu is a first-class city located in the province of Cebu. It has a population of over 408,112 people, which reside in Lapu-Lapu’s 30 barangays. The city has a total land area of 58.1 square kilometers, which takes up most of Mactan Island.

Lapu-Lapu is best-known for its scenic beaches and beautifully designed churches. Over a million tourists frequent the city every year to visit these destinations. Different resort, hotel, and casino firms continue to expand in the city to attract even more visitors.

Various developers like Pacific Grande Realty and Development Corp., ALDEV Land, PrimaryHomes, and even Sta. Lucia Realty & Development, Inc. are consistently creating residential properties for the city’s growing population. Townhouses, condominium complexes, and subdivisions are popping up across Lapu-Lapu for people to buy or rent as their vacation or forever home.

Solid Townhomes is close to many public and commercial establishments in Lapu-Lapu.

Townhouse with Clean Title For Sale 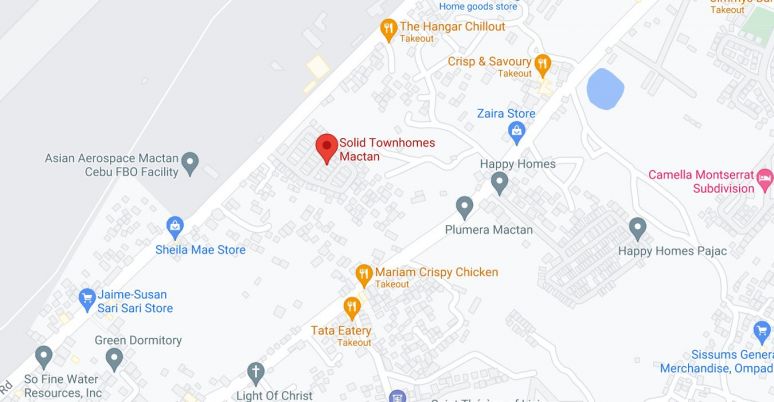