Kingstown 2 Subdivision is a prime residential community in Caloocan City, where urban and rural elements meet. The development is conveniently near Kingstown 1 Subdivision but presents a different array of properties for sale, including modern-designed townhomes and pre-owned houses.

Why Kingstown 2 Subdivision is the Perfect Choice for You

Located in North Caloocan, Kingstown 2 Subdivision is a quite relaxing place to go home to after a long day in a busy district. Although Caloocan is classified as a highly urbanized city in Metro Manila, some of its areas have retained a serene ambiance by sharing borders with Bulacan province. Included in these areas is Bagumbong, wherein Kingstown 2 Subdivision is located. This residential community is the perfect choice to achieve a balance between modern living and a countryside-like feel.

Within the community of Kingstown 2 Subdivision, you’ll find brand-new townhouse units with two bedrooms, one bathroom, and a car garage with a service area. Pre-owned units are likewise available within the subdivision and are usually less expensive than brand-new ones. You can even guarantee more savings since these pre-owned houses have negotiable prices.

Amenity-wise, Kingstown 2 Subdivision in Bagumbong, Caloocan has a clubhouse where families and neighbors can bond together. The subdivision is also gated with reliable security measures to ensure the safety of all residents and their properties.

Kingstown 2 Subdivision is among the hottest residential locations today because of its affordable house and lot units. This affordability feature of the development is notable because of the presence of pre-owned units. While not everyone is keen on living in a house that has been previously occupied, you should know that there are real benefits from buying a pre-owned property.

However, if you really want a brand-new and ultra-modern house for you and your family, you’ll find one in Kingstown 2 Subdivision for less than P3 million.

Other Features:  Your Financing Options

Another great thing about Kingstown 2 Subdivision units for sale is that many of them can be availed through financing options. If you can’t make a one-off payment, you have the option to take a housing loan from a bank or government-mandated program. If unsure which type of housing loan is right for you, refer to this guide for some handy tips.

Bagumbong in North Caloocan is an area mostly filled with residential communities, surrounded by commercial and industrial establishments. The neighborhood is valued for its strategic location since its conveniently near Quezon City, particularly Novaliches and its famous landmarks like Ayala Malls Fairview Terraces and SM City Novaliches. Bagumbong is also minutes away from the more laid-back areas of Bulacan, such as Marilao and San Jose del Monte.

Other prominent landmarks near Kingstown 2 Subdivision in Bagumbong, Caloocan are the following:

Via Bagumbong Road or T. Santiago, Kingstown 2 is also accessible from Valenzuela City. Going to and from the city would take approximately 30 minutes without traffic. 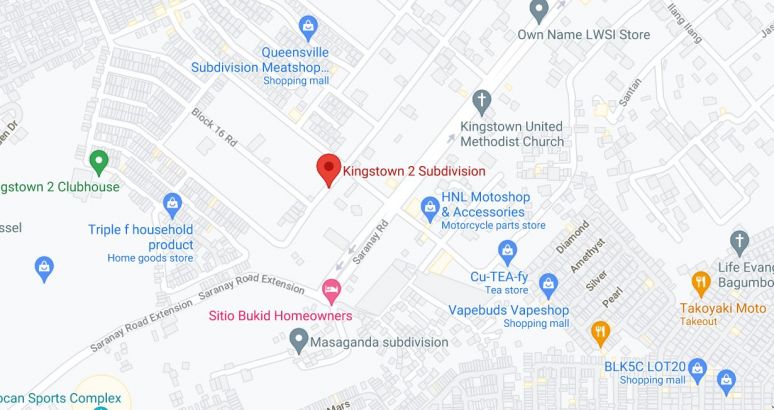