1-Bedroom Condominium for Bedspace up to 4 People

Apartment For Sale in Pembo Makati

Bulding for sale at makati very near to the fort bgc

House and lot with Apartment Business

Apartment Building with income For Sale in Guadalupe Viejo, Makati

For Sale Dorm Building in Kalayaan near The Fort BGC

Dormitory for Sale in Makati City

The Beautiful Transformation of Fort Bonifacio into Bonifacio Global City

Fort Bonifacio was one of the largest military reservations of the Armed Forces of the Philippines (AFP) in Metro Manila and served as the headquarters of the Philippine Army. Located on a vast stretch of land straddling the cities of Taguig and Makati, it was first opened during the American colonial period as Fort William McKinley, named after the sitting U.S. president when the Philippine Islands transitioned from being a 300-year-old Spanish colonial outpost in the Far East toward becoming the newest territorial acquisition of the Americans. When the Philippines finally gained its independence from the United States in 1946, Fort William McKinley was renamed as Fort Andres Bonifacio, in honor of the Spanish mestizo patriot who founded the Katipunan and led the resistance against Spanish colonial rule, and taken over by the Philippine Army.

When the AFP launched its modernization program during the middle of the 1990s, it was decided that some of its property holdings would be sold to the private sector to partly fund the weapons and equipment acquisition projects. Among the assets sold was a vast portion of the Fort Bonifacio reservation that was idle, filled with tall cogon grass and not being used for military or personnel housing purposes. The more northern side of the military camp was eventually sold to the private sector and was initially named “The Fort” before becoming “Bonifacio Global City (BGC)” while the Philippine Army retained the southern side.

At present, BGC is the newest and fastest-rising central business district in Metro Manila. It is now home to some of the top local and foreign corporations, and foreign embassies; and will soon be the new base of operations of the Philippine Stock Exchange. It is also evolving itself as a major shopping, leisure, and entertainment destination with its plethora of malls, clubs, hotels, and restaurants. Academic institutions are also starting to establish themselves in BGC, taking advantage of its prime location within a central business district by setting up professional schools in the area.

With the rise of BGC as the newest central business district of Metro Manila comes the rise of multiple real estate developments on what used to be idle and cogon grass-filled land. This makes BGC one of the most promising property markets in Metro Manila. Competition among real estate companies in Fort Bonifacio is huge, as they churn one project after the other that offer varying top-level amenities and deliverables in such a short span of time.

Apartment buildings are the most common property developments in Fort Bonifacio. BGC was planned specifically to cater to a certain sector, hence assigning only a portion where they can build structures. The assigned sectors had limited land areas, which prompted real estate companies to build apartment buildings to make full use of the lots acquired.

Real estate developers compensated by coming up with apartments with the best possible amenities and unit deliverables to entice investors. The trade-off paid off, as investors raced to outpace each other in grabbing the first best-priced apartment with great amenities that they could put their hands on. Since then, apartment units in Fort Bonifacio have been selling like hotcakes, making the property market in the area the most promising, and causing real estate companies to come up with better projects and more effective marketing gimmicks.

Your Options for an Apartment for Sale in BGC 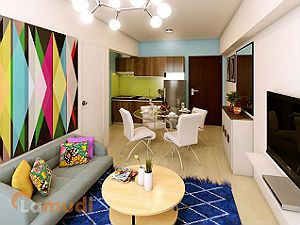 Buying an apartment in BGC, the most promising real estate market in Metro Manila, is a good investment decision, especially now that property values are appreciating at a relatively fast rate. One apartment for sale in Fort Bonifacio is a three-bedroom, 155.98 square meter unit at the East Tower of The Beaufort, which is priced at PHP 27.5 million, and comes with one parking space. Another BGC apartment for sale is on the fifth floor of Two Serendra’s Dolce Tower with the unit having a floor area of 521 square meters, three bedrooms, an allocated parking slot for one car, and a price of PHP 25 million. Another three-bedroom apartment that is available for purchase is at Avida Towers 3 with the unit having a floor area of 56 square meters.

An investor is assured that the value of the apartment being purchased in Fort Bonifacio will appreciate, especially when sold in the resale market, due to the further development of the district. If one does not intend to resell, the apartment can earn him passive income through rentals since many professionals who work in BGC are looking for a place to stay that are near their workplace. However, the best decision one can make is to actually occupy the apartment and experience first-hand the continuous transformation of Fort Bonifacio as time progresses.