1-Bedroom Condominium for Bedspace up to 4 People

14 General Espino Ave. Zone 6 Signal Village Taguig City (Near ARCA South) Signal Village, Taguig
Rush Sale! 3-storey Apartment Building for Sale! Only 6Million negotiable and I am open for any payment schemes or terms of payment! 13 doors apartment. Presently generating 600K annual rental passive income. Strategically located very near the perimeter of ARCA South. LA 93sqm.FA approx 300sqm. The right time to invest in ARCA South area is NOW! It would be best if you inspect the actual unit, because it is not photogenic. The frontage is not wide, but long property. But the income and Return On Investment is very good! The exact address is #14 Gen. Espino Ave. Zone 6 Signal village Taguig City. you can look for Rey, my caretaker, to assist you during the actual viewing or inspection.
₱ 6,000,000
13
Bedrooms
300 m²
Floor area
View More Info
Contact Agent

Apartment For Sale in Pembo Makati

Apartment Complex for Sale in Pateros

Apartment For Sale In Metro Manila

5.2km
405 Virginia Street, 128 zone 13, Pasay City San Roque, Pasay
Incredible investment opportunity in a new 44 units dorm building strategically located in Pasay, just one Jeepney ride away from Ayala triangle and Mall of Asia Area.Excelent return on investment of 8% per annum.Located in a 182 sqm lot, this 4 storey apartment building has 44 studio units with capacity for 2-3 people each. It has a total build surface of 750 sqm. Occupation has always been close to 100%. Very low maintenance costs and 0 headaches.Occupation is very high due to very affordable rental price (information delivered when visit is confirmed) and very good location.Land is also sold together with the building and it is appreciating fast, price doubled last year alone!!Clean titles, taxes, everything. Ready for transaction to trustworthy buyer.Phone and look for Jerick for more detail.
₱ 39,900,000
1
Bedroom
187 m²
Floor area
View More Info
Contact Agent

Award-Winning Living with Strong Links to the Past

In the recent years, Taguig has received an increasing number of positive reviews. In November 2014, the city was awarded the Seal of Child Friendly Local Governance. In 2013, it was the Third Best Public Employment Service Office in Metro Manila. The city is also among the top ten cities who have excelled in the use of information and communication technologies for the advancement of the delivery of services.

The city has definitely come a long way, especially since only a decade ago, its main business district Bonifacio Global City (BCG) was mostly an empty plot of land with only a handful of commercial establishments. Now, it is the location of several noteworthy companies and a place many believe is a great basis for future developments. Some even say that it will eventually outdo Makati as the main financial and recreational center.

While considered a city of the future because of its potential and upcoming projects like Arca South and McKinley West, Taguig is still a place deeply rooted in its past. The Department of Science and Technology, which was established in 1958 continues to hold office in a mini forest and ecotourism park located in the city’s Upper Bicutan area. Fort Bonifacio was built in 1940, and continues to serve as the headquarters of the Armed Forces of the Philippines. The city is also the location of the Manila American Cemetery and Memorial, one of the 25 sites around the world administered by the American Battle Monuments Commission.

With modern financial districts, notable landmarks, and numerous places of interest, Taguig is undoubtedly a Lifestyle City. In addition to all that has already been mentioned, the foremost educational centers, such as the Enderun Colleges and International School Manila, and health facilities, such as the world-class St. Lukes Medical Center Global City are located here. It is therefore understandable why the city is a highly desired residential location. 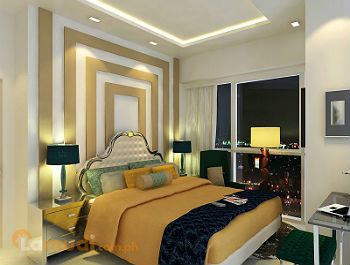 Its comparatively hilly terrain is the site of many real estate developments from high-rise condominiums to commercial spaces that are reminiscent of Beverly Hills. Many people are seen jogging, enjoying their coffee outdoors, reading novels, and walking their dogs because of the city’s laid-back lifestyle. It is less congested and has a relatively cooler climate than other parts of capital.

There are many options available on the market for those looking to buy an apartment in Taguig. Aside from the high-rise condos of the BGC, low-rise flats in McKinley Hill can also be found in developments, such as as Tuscany Private Estates and McKinley Garden Villas. Units in these estates can range from PHP 8.8 million to PHP 16 million.

Renting a flat in Taguig is not the only option for middle-income earners because the city also has affordable apartments for sale. In Bonifacio Heights, two-bedroom units start at PHP 3.7 million. Outside Fort Bonifacio, one can find Acacia Estates in Barangay Ususan. This residential project is comprised of several individual estates, including Ivory Wood, Royal Palm Residences, and The Birchwood.

Find Other Properties in Taguig