Cielo Paulme Mangornong
Robinsons Land Corporation
Member Since 2020
Robinsons Land Corporation (RLC) is one of the Philippines’ leading real estate companies and most reputable developers of mixed-use properties, office buildings, residential condominiums, as well as land and estate developments, including socialized housing projects located in key cities and urban areas nationwide. RLC also leads in the development and operation of life style shopping malls and hotels. RLC incorporated on June 4, 1980, serves as the real estate arm of JG Summit Holdings, Inc. (JGS), one of the country’s largest conglomerates with diverse interests in branded consumer foods, agro-industrial and commodity food products, telecommunications, petrochemicals, air transportation and financial services. RLC is a true Philippine company with a wide geographical reach as north as Illocos and as south as South Cotabato. Most of its developments are integrated in mixed-use properties strategically located in key cities and other urban areas nationwide. Each and every project of Robinsons Land Corporation has led to the rise of thriving, harmonious, in line with JG Summit’s vision to make life better for the Filipino nation. For Details and inquiry contact us in Viber/Whatsapp/kakao

Diane Principe
Robinsons Land Corp
Member Since 2021
RLC Residences properties offer a home that features an elevated lifestyle experience. Also give the homeowners a chance to live smart and productive through its smart home features and digital solutions for a hassle free condo experience.

Dexter Ong
Keller Williams Manila Bay
Member Since 2021
The No. 1 Real Estate Agency in the world. We are Keller Williams Manila Bay The KWManilaBay consists of an accomplished team of experienced professionals in key positions. The company is committed to providing the finest full-service real estate brokerage by employing the most professional, well-trained and ethical real estate practitioners in the nation. Our mission is to offer our company’s service to a broader field of prospective clients looking to purchase or sell real estate.

Greenhills, San Juan
We are at Greenhills Elan Hotel in Annapolis Street in Greenhills, San Juan City. You may enjoy the amenities and facilities of Greenhills Elan Hotel- the restaurant, swimming pool and jacuzzi, billiard & dart room, business center, men's salon, spa, & fitness center. The 70- sqm unit has a dining area, kitchen, 2 rooms- 1 Master's bedroom and the other room can be converted into a bedroom, and 1 toilet and bath. The unit is FULLY FURNISHED but you may opt to bring your own. It is located at the 28th floor and has an almost 360 degree view of the city. The famous Greenhills Shopping Center which has the famous "tiangge" or bazaar- type stalls is right across the building as well as Promenade Mall, Theatre Mall, and V Mall where you can find banks, restaurants, spa, cinemas, parlors, drugstores, grocery, and shopping. All these malls are walking distance.
₱ 35,000
2
Bedrooms
1
Bath
58 m²
Floor area
View Info
Contact Agent

The Viridian In Greenhills San Juan Condominium For Rent

Studio Unit for Lease with Parking Located in Greenhills

Greenhills, San Juan
Studio unit for lease in Greenhills Floor: 17th floor Unit size: 48sqm -with parking -1 bed, 1 bath -With balcony facing northeast greenhills -Furnished with contemporary furniture P40,000/month +12% VAT 2 months deposit, 2 months advance Minimum 12 months  Ready for occupancy Experience an exceptional Subdivision lifestyle at the heart of Greenhills North Greenhills is a Subdivision in San Juan, one of the top cities in Metro Manila. North Greenhills provides its residents with a lifestyle of privilege that many people can only dream of. North Greenhills is yet again breaking the boundaries of residential living by bringing comfort and affordability, ensuring residents live the life they deserve as they create more amazing memories with their families. These makes getting a unit at North Greenhills worth every cent. Properties within San Juan area are quite strategically-located that's why owning a Subdivision is a worthwhile investment one can make. Choosing the right location is one of the first and main factors in deciding when buying or renting a property. North Greenhills is in a prime location in Greenhills, Metro Manila, within a convenient distance from establishments like schools, churches, malls, offices and restaurants, making a North Greenhills purchase perfect for those starting a family, a student or a professional looking for a place near their work and school.
₱ 45,000
1
Bedroom
1
Bath
48 m²
Floor area
View Info
Contact Agent

Greenhills, San Juan
Condo Unit for rent at One Wilson in Greenhills, San Juan Description : RENTAL FEE : Php 40,000.00 One Wilson (corner of Wilson Street and Ortigas Ave. In front of Greenhills Shopping Center)   Only 10 units per floor.   = 5 facing west, 5 facing east.  unit is facing east towards Gilmore. So tenant has access to only his floor and only his side. So tenant only interacts with 4 of his neighbors in his floor.    Building with standard amenities  -  and some additional amenities condos (like poker room, indoor playroom, daycare).
₱ 40,000
2
Bedrooms
2
Baths
61 m²
Floor area
View Info
Contact Agent

Greenhills, San Juan
This condominium for rent with a floor area of 42 sqm is located at The Viridian, Greenhills, San Juan. This fully furnished studio features 1 bathroom and 1 parking space. It also offers convenient access to lifestyle options and alternatives for relaxation and enjoyment for individuals and families in a progressive neighborhood. Potential home buyers can expect to enjoy full access to the gym and swimming pool.
₱ 39,999
1
Bedroom
1
Bath
42 m²
Floor area
View Info
Contact Agent

For Rent: Brand New Studio Unit at The Viridian in Greenhills, San Juan

Greenhills, San Juan
Looking for a peaceful, comfortable yet affordable home to stay?  What you need might be with CCH Properties Leasing's Platinum 2000,  located at Unit 1904 Platinum 2000 #7 Annapolis Street, Greenhills, San Juan City, a with parking lot. Very accessible in Markets, FastFood Chains, Main Road etc. What are you waiting for? Come and stay with us! “Home is where one starts from.” –T.S. Eliot
Contact agent for price
3
Bedrooms
1
Bath
194 m²
Floor area
View Info
Contact Agent

For Lease One Wilson Place, 2 Bedroom Unit in San Juan

Furnished Studio in Viridian with Parking

For Rent One Bedroom Condominium @ One Wilson Square, San Juan

Home in the Middle of Metro Manila 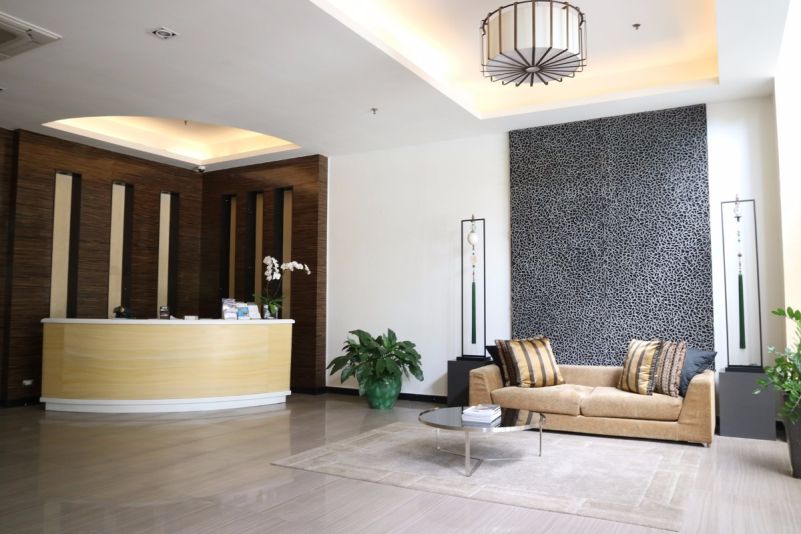 The area popularly known as Greenhills in San Juan is one of the most convenient places to reside, study, and work within Metro Manila. Condominium living in Greenhills also follows this trend of convenience, especially with a selection of furnished and unfurnished dwellings ready for renting. Most of the available condominiums have one or two bedrooms, however there are also studios and more spacious three bedroom apartments for lease. Availing of the condominiums may also come with use of building facilities such as parking slots, gyms, swimming pools, playgrounds, and other common areas---a great boon to young families seeking a home in this area.

A great plus of living in Greenhills is one’s proximity to commercial centers such as the Promenade Greenhills, Shoppesville, and the famed Greenhills Shopping Center and tiangge. Now shopping and bargain hunting both during peak season and off-season need not become a marathon or an arduous expedition. Greenhills is also the site of the Cardinal Santos Medical Center, a state of the art private hospital. Exclusive schools such as OB Montessori, Xavier School, and the Immaculate Conception Academy are also found within the bounds of Greenhills. A Catholic parish, Mary the Queen, as well as other places of worship can be found in the Greenhills area.

Greenhills is readily accessed via Ortigas Avenue, which connects this area to New Manila as well as to Mandaluyong City and Metro Manila’s main thoroughfare EDSA. Buses and jeepneys ply regular routes passing through Greenhills. Greenhills is a short distance from the MRT-3 train line, which provides a convenient means of transportation to the cities of Mandaluyong, Makati, Pasay, and Quezon City.

The Heights of San Juan 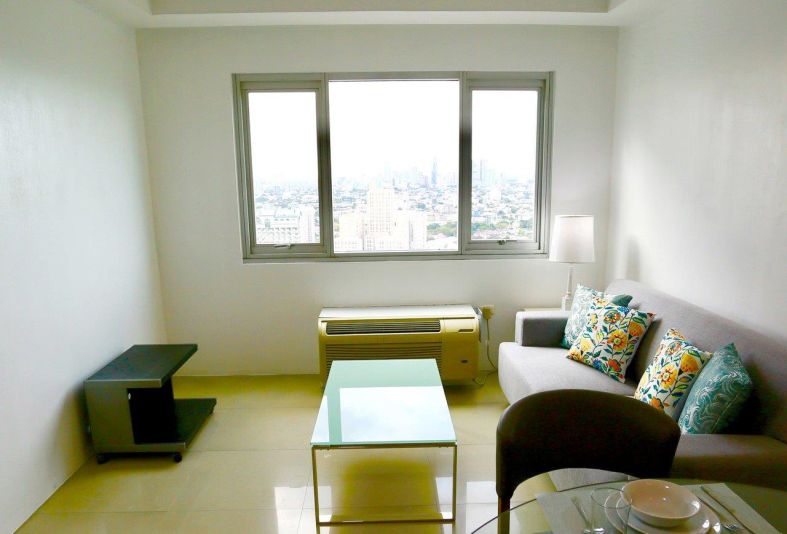 The City of San Juan is comfortably ensconced in hilly, rolling terrain, which has given rise to some place names such as Little Baguio and Addition Hills. Nowadays, its 21 barangays are highly urbanized, having undergone rapid commercial and residential development. A variety of specialty restaurants and stores have made their home in San Juan. A variety of cuisines ranging from Chinese, Japanese, Italian, just to name a few, can be enjoyed by residents and visitors. San Juan also is the site of Cinema ’76 Film Society, a theater dedicated to promoting Filipino indie films.

Families seeking a home in San Juan will have little difficulty in picking schools for their children. Apart from the aforementioned schools in the Greenhills area, San Juan also has a variety of private and public basic educational institutions. A tertiary state university, the Polytechnic University of the Philippines, is located in Barangay Addition Hills. The city of San Juan is also in close proximity to other prestigious schools in neighboring cities such as La Salle Greenhills in Mandaluyong City, Saint Pedro Poveda College in Quezon City, as well as the Central Colleges of the Philippines and the University of the East Ramon Magsaysay Medical Center College of Medicine in Santa Mesa, Manila.

San Juan has been a prime location for developers due to its central location with respect to the rest of Metro Manila. This city is bound by the City of Manila to the West, Quezon City to the north and east, and Mandaluyong to the south. A network of roads as well as a readily available public transport system have made living and working in San Juan not only feasible but desirable. Within thirty minutes to an hour, residents can reach the commercial district of Gilmore in New Manila, or Cubao in Quezon City. Buses and the MRT-3 train line provide ready access routes to the business district of Makati. San Juan’s main artery, Ortigas Avenue, serves to connect San Juan to Pasig City as well as Cainta, Rosario, and other towns in Rizal Province.

Find Other Properties in Greenhills