House and lot For Sale in Holy Spirit, Metro Manila

Mhai.Glen Aguas
Almyra Aguas
Member Since 2019
AGBA Realty was established in January 2017 in Capas Tarlac. We offer professional one stop service from our experienced property specialist. Abraham “Glen” Aguas Jr. and Real Estate Broker Almyra Aguas founder the AGBA Realty, bringing with over 5 years experience in the real estate industry in Tarlac. OUR SERVICES - Sells House and Lots -As Property Consultant, we presents to the Buyer the details of the project we accredited he/she is interested in. The presentation includes information such as the overview of the project, available house models, amenities and financing options. -We assist our client to fill-out the necessary details in the Buyer's Information Sheet, Quotation Sheet and Reservation Agreement. The purchase is formalized upon payment of the reservation fee. -We assist our client to comply the necessary documents (as required) for the purchase. Requirements may vary depending on employment status (if Locally Employed, Self-employed, or OFW, and payment scheme). -We assist our client for inspection of the unit due for turnover to confirm that all commitments are delivered.

Holy Spirit, Quezon City
*UnionBank may, at any time, withdraw any of the properties listed above prior to the auction. *Availability of units and prices are subject to change without prior notice. *Payment of Creditable Withholding Tax (CWT) is for the Buyer's account. *Bids should be submitted together with the Php 20,000 Show Money (Manager's Check) no later than January 28, 2020.  *All winning bidders will be subject to credit checking. *Misprints should not be construed as misrepresentation of the property.
₱ 1,552,000
60 m²
Floor area
34 m²
Land Size
View Info
Contact Agent

Holy Spirit, Quezon City
3 Storey Townhouse for sale in Don Antonio Heights Holy Spirit Commonwealth Quezon City BRAND NEW AND READY FOR OCCUPANCY Near Sandigan Bayan Commonwealth Avenue, UP Diliman, Diliman Doctors, Don Enrique Heights Unit C & K UNIT C – READY FOR OCCUPANCY Floor Area : 126.95sqm Lot Area : 42sqm Bedroom : 3 + maids room Toilet and Bath : 3 Garage : 2 Sample Computation: Price 8,500,000.00 Downpayment : 2,180,000.00 Reservation Fee : 200,000.00 Remaining Balance : 6,320,000.00 Monthly Amortization 5 yrs – 124,399.47 10 yrs – 72,568.84 15 yrs – 55,926.28 20 yrs – 48,055.51 UNIT A – FRONT UNIT Floor Area : 137.71sqm Lot Area : 45.72sqm Price : 9,300,000.00 Bedroom : 3 + maids room Toilet and Bath : 3 Garage : Fits to 2 SUV UNITS A All About Don Antonio Heights Located at the heart of Quezon City, Don Antonio Heights is a residential subdivision uniquely designed to be  your enclave of comfort and convenience -- perfect for you and your  family. While the Commonwealth area of Quezon City is known for bustling  activity and busy traffic, Don Antonio Heights allows you to enjoy this  convenience while living a comfortable life. You will find several  types of houses for sale and for rent in this area, mostly townhouses  ranging from 123 sqm to 185 sqm with three bedrooms, three toilets and  baths and a two-car garage. With several payment schemes available, Don  Antonio Heights truly caters to Filipino families who simply dream of  having their own home. Why Don Antonio Heights is the perfect option for you When  you're raising a family, convenience and access is of utmost  importance, especially to the things that you need the most such as good  schools, reputable hospitals and complete commercial hubs. All of those  are covered when you live in Don Antonio Heights. Good schools  your kids can attend near the property include Philippine Science High  School, School of the Holy Spirit, and University of the  Philippines-Diliman. With Katipunan Avenue nearby, Ateneo de Manila  University and Miriam College are also options for you. Reputable  hospitals where health emergencies can be attended to include Diliman  Doctors Hospital, New Era General Hospital, General Malvar Hospital and  Metropolitan Medical Center and Satellite Clinic.
₱ 8,500,000
3
Bedrooms
126 m²
Floor area
42 m²
Land Size
View Info
Contact Agent 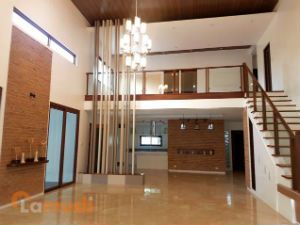 Some Quezon City areas can be considered household names. There is New Manila and its sprawling suburban abodes; South Triangle and its quaint townhouses and bungalows; Eastwood City and its towering condos; and Cubao, which is busy with activity 24/7. Some areas, however, are not as well known yet still popular enough among homebuyers and property-hunters because they offer some of the best house and lots for sale in Metro Manila. One of these places is Barangay Holy Spirit.

Bound by Congressional Avenue to the west, Holy Spirit is one of the barangays that comprise Quezon City’s Second District (along with Batasan Hills, Bagong Silangan, Commonwealth, and Payatas). Within its borders are some popular gated communities or subdivisions, including Don Antonio Heights, Don Enrique Heights, and Mapayapa II Village. Also found within this barangay is the School of the Holy Spirit of Quezon City. Although Holy Spirit is largely a residential location, its streets are lined with commercial establishments, such as banks, supermarkets, and convenience stores.

Why Opt for a Holy Spirit House and Lot for Sale

Long been a popular location to find a house and lot in Quezon City, Holy Spirit is expected to become more well-known and sought-after over the next decade or so. This is because the MRT-7—a commuter line that will run from North Triangle to San Jose Del Monte, Bulacan—will ply Congressional Avenue on its way north, passing through Holy Spirit. There is a proposed station near the barangay, which will make commute for its residents to as far north as Bulacan and as far south as North Avenue (connecting to the MRT-3) short, quick, and easy—not to mention that commuter rail lines boost property values in the areas they serve. Thus, if you are looking for a house and lot for sale in QC, then Barangay Holy Spirit is one of the places you should consider. 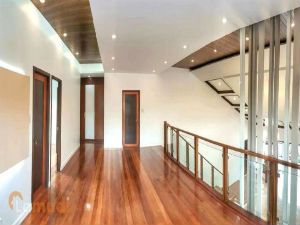 One house and lot for sale in Holy Spirit currently on offer is a newly built townhouse in Don Antonio Heights. With each unit boasting of four bedrooms, two bathrooms, and a two-car garage, this property is quite a bargain as each unit has a selling price of just PHP 8.86 million. On the more affordable side are PHP 5.565 million townhouses, which are also situated in Barangay Don Antonio Heights. These three-bedroom, two-bathroom townhouse units are also available on flexible payment schemes.

If a single-detached property is preferred, then this sprawling four-bedroom house might be for you. Some might say this property is pricey at PHP 33 million, but this home boasts of a floor area of 450 square meters, a lot of 330 square meters, and a three-car garage. This property is situated in Don Antonio Heights Subdivision. Even pricier is a PHP 38 million, five-bedroom, seven-bathroom house and lot for sale in Holy Spirit, which is also located in Don Antonio Heights Subdivision. Sitting on a lot measuring 421 square meters, this property comes with an entertainment room, two kitchens, a six-car garage, solar heaters, and an overhead water tank. Indeed, this property would be an upscale abode in Quezon City.

Find Other Properties in Holy Spirit