Cubao, Quezon City
Code : DS882559 Category : For Sale Project : Apartment City : Cubao, Quezon City Size : 524 sqm Price per sqm : Php 229,007.63 Selling Price : Php 120,000,000.00 Details of the Property: • Good Lot Location • With 5 doors apartment in frontage and community compound at the back • Monthly income at Php 70,200.00 Cubao is the commercial heart of Quezon City, at the intersection of EDSA and Aurora Boulevard. Cubao lies at the intersection of LRT Line 2 (LRT-2) and MRT Line 3 (MRT-3) and is reachable from both of them. The stations of both lines are named Araneta Center-Cubao. LRT-2 runs above Aurora Avenue west from Manila into Santolan in Pasig. MRT-3 is built at the middle of EDSA and runs from Taft Avenue in Pasay to North Avenue within Quezon City. 3 Great Reason why you should invest a property in Quezon City? 1. It’s accessible Quezon City is strategically located; it has easy access to the Northern and Southern areas of the Metro. Another perk of living in the city is its easy public transportation. MRT-1, MRT-3, and LRT-2 are all accessible in different parts of the city. 2. Growing central business district Work opportunities are abundant in the city and will continue to grow more in the following years. The city is home to outsourcing businesses, as well as new businesses that cater not just only to locals, but also to neighboring cities alike. 3. Quality medical and educational institutions Another reason people choose to stay in Quezon City is because it’s home to quality educational institutions as well as hospitals and medical centers. If you’re interested in BUYING this property or wish to SELL a property, don't hesitate to contact the following hotlines: Bien Singson Licensed Real Estate Broker PRC#0005179
₱ 120,000,000
5
Bedrooms
5
Baths
524 m²
Floor area
View Info
Contact Agent

14-Door Apartment for Sale in Novaliches, Quezon City near Bayan

Apartment and lot for sale in Cubao

4dr Apartment with monthly income of 75k to 100k per month

For Sale! 3 Door Apartment in La Loma in Quezon City

My HomeTown Realty
MEMBER SINCE 2021
2

Diliman, Quezon City
I am selling my apartment of two bedrooms located in Pinay Quezon city.  I am ready to offer 15%  less than listed price.  Mode of payment 50% on signing contract and balance can be paid installment of 18 months.  Title will be transferred after full amount received.
₱ 6,500,000
2
Bedrooms
2
Baths
54 m²
Floor area
View Info
Contact Agent

Quezon City was named after the second president of the Philippines, Manuel L. Quezon. It was initially established to serve as the country’s capital city and from 1948 to 1976, it was. Born out of the small individual towns of San Francisco del Monte, Novaliches, and Balintawak, the city may no longer be the nation’s capital, but it is still the seat of many important national government offices.

It is also the largest city in Metro Manila in terms of land area (166.2 square kilometers). Its total registered population (more than 2.9 million as of 2010) makes it one of the largest sources of manpower in the county. With a great deal of space and people, the city continues to be one of the most significant economic centers in the country. As such, you’ll get the most value out of an apartment for sale in Quezon City as property values appreciate and more people show interest in living here.

Recent years have seen Quezon City receive local and international acclaim, mostly for its efforts to improve its economic potential, environmental sustainability, and the overall quality of life of its residents. The combined efforts of residents, investors, and the local government has allowed Quezon City to achieve significant progress in recent years.

The city is currently the country’s largest service economy, with the majority of registered businesses engaged in wholesale and retail. It is also the location of several mixed-use townships, many of which are integrated developments with various businesses, condominiums, restaurants, and shopping malls. The most well-known are the following:

The city is regarded as the national capital region’s center for medical care. Several government-owned specialty hospitals are located here, including the Philippine Heart Center, the Lung Center of the Philippines, the National Kidney and Transplant Institute, and the Philippine Children’s Medical Center. 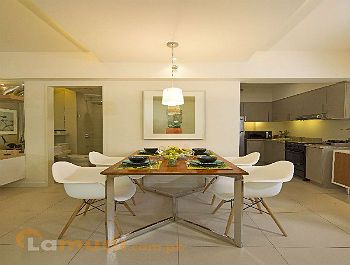 There are a number of quality and affordable options for an apartment for sale in Quezon City currently available on the market. The Quezon City skyline is dotted with high-rise to medium-rise flats and rowhouses from many of the country’s best real estate developers. 53 Benitez by Rockwell Primaries, a subsidiary of Rockwell Land, has units that range in price from PHP 6.5 to 10.3 million. Units at Magnolia Residences by Robinsons Land have prices that range from PHP 3.2 to PHP 7.3 million. Units at Avida Towers Vita 1 by Avida Land Corporation are priced from PHP 2 million to PHP 7.6 million. An apartment for sale in Quezon City comes with numerous options when it comes to amenities such as gyms, swimming pools, function rooms, and landscaped gardens.

Smaller individual estates are also spread throughout the city. Examples of these can be found in Ferndale Villas, Stellar Place, and The Manors Celebrity Place. Apartments for sale in Quezon City in these child-friendly locations are priced anywhere from PHP 2 million to PHP 14 million.

Living in Quezon City can be pricey, and one of the best ways to stay in a reasonably priced district is to live in an apartment. There’s an apartment for sale in Quezon City with as many rooms and as much space as a traditional house and lot while costing less in terms of asking price and maintenance.

Is there an apartment for sale in Cubao?

Yes, there are 6 apartments for sale in Cubao. Cubao is the heart of commercial activity in Quezon City. Most people rent condo units here, but there are those who prefer to live in affordable apartments for rent.

Is there a foreclosed apartment for sale in Quezon City?

Is there a bedspace apartment for sale in Quezon City?

Yes, there are 2 bedspace apartments for sale in Quezon City. Bedspacing facilities are incredibly lucrative rental properties that can provide you with multiple income streams.