Christian Ocampo
Ortigas Land
Member Since 2019
Ortigas Land is one of the pioneers in the Philippine real estate landscape. It's currently developing mixed-use estates in the middle of Metro Manila, which are The Capitol Commons, Circulo Verde, Greenhills Center, Ortigas East and The Galleon at Ortigas Center

Pio Del Pilar, Makati
West Of Ayala Condominium 252 Gil Puyat Avenue, near Ayala Avenue, Makati City, Metro Manila beside Burgundy Corporate Tower, walking distance to Makati Med and Techzone 3 bedrooms, 118 sq.m. unfurnished Master bedroom with own bathroom with balcony maid's room with own toilet 2 toilets and bath * parking optional for additional fee Lease Rate monthly:  Php60,000 Lease terms:  price inclusive of association dues, exclusive of VAT and taxes, 2 months security deposit and 12 months advance (negotiable) Experience an exceptional Condominium lifestyle at the heart of Sen. Gil Puyat Avenue West of Ayala is a Condominium in Makati, one of the top cities in Metro Manila. West of Ayala provides its residents with a lifestyle of privilege that many people can only dream of. West of Ayala is yet again breaking the boundaries of residential living by bringing comfort and affordability, ensuring residents live the life they deserve as they create more amazing memories with their families. These make getting a unit at West of Ayala worth every cent. Properties within Makati area are quite strategically-located that's why owning a Condominium is a worthwhile investment one can make. Choosing the right location is one of the first and main factors in deciding when buying or renting a property. West of Ayala is in a prime location in Sen. Gil Puyat Avenue, Metro Manila, within a convenient distance from establishments like schools, churches, malls, offices and restaurants, making a West of Ayala purchase perfect for those starting a family, a student or a professional looking for a place near their work and school.
₱ 60,000
3
Bedrooms
3
Baths
118 m²
Floor area
View Info
Contact Agent

3 Bedroom Condo Unit for Rent at CityLand in Makati City

Fully Furnished Studio For Lease in The Oriental Place Makati

Getting to Know Pio del Pilar Formerly known as Culi-Culi, Pio del Pilar was once a vast rice field filled with fruit trees ad vegetation. More than a hundred horses were kept here –as they were used to service calesas and karitelas back then. The barangay was named after the Philippine hero General Pio del Pilar who was a resident here.

Barangay Pio del Pilar is one of seven barangays comprising the Westside Cluster of the first district of Makati. It has a land area of 0.88 square kilometers or 3.2% of the city’s total land area. As of 2010, it has an estimated population of 27,000. Bordering Pio del Pilar up north are Barangays San Isidro and San Antonio, Barangays Bangkal and San Lorenzo down south, Barangay San Lorenzo in the east and Pasay City at its west.

Public transportation is served mainly by the Philippine National Railways Pasay Road station located on Estacion Street. Pasay Road. It is one of only two stations to have its own access road. The station takes its name from Pasay Road, the old name of the Makati section of Arnaiz Avenue.

The PNR South Commuter Line leads to Tutuban in Manila and all the way to Calamba, Laguna down south. Although the train system is ageing and dilapidated, it is still patronized by many commuters as it is still the fastest way to get around the metro.

Within the barangay, one can find other places of interest such as the Pio del Pilar Elementary School, Koliseyum ng Bayan – a government-owned basketball court, Don Bosco Parish Church, Waltermart and Citimotors. 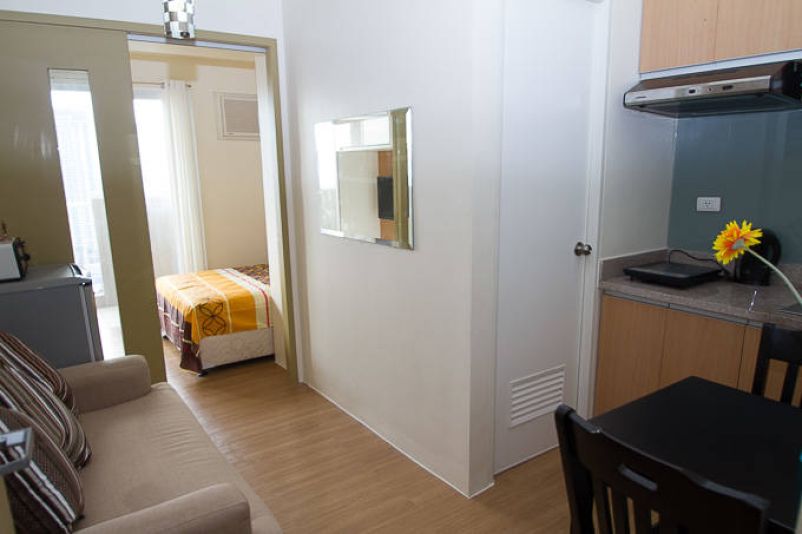 Pio del Pilar is mainly a commercial area. Numerous business establishments such as banks, gasoline stations, restaurants, apartelles, hotels and shopping stores can be seen everywhere. This is a plus point to dwellers here as they are close to everything.

Living Close to the Business Districts

Working in Metro Manila can be such a hassle especially having to brave the traffic every day. But living in Pio del Pilar can have its advantages, as it is just 2.9 kilometers away from Makati CBD or a 14-minute drive via private vehicle. If heading to Bonifacio Global City, it takes about 20 minutes via McKinley Road on a private vehicle. Meanwhile, Pio del Pilar to SM Mall of Asia is about a 22-minute drive via EDSA.

While Makati is well-known for its skyscrapers and upscale malls, one can be surprised to find hidden gems in the quaint Pio del Pilar. Here, one can find hole-in-the-wall Chinese restaurants that are truly worth a try.