House and lot For Sale in Forbes Park, Metro Manila

Homes in the Philippines’ Most Exclusive Address

Established in the 1940s and named after James Cameron Forbes, an American Governor-General of the Philippines, the 250-hectare Forbes Park in Makati is perhaps the Philippines’ most exclusive and expensive place to buy a house. This enclave of the richest of the rich is where politicians, business tycoons, celebrities, and boxing icon Manny Pacquiao have their homes. This gated neighborhood is also coterminous with Barangay Forbes Park, one of Makati’s 33 barangays. It is also one of the first villages to be developed by Ayala Corporation. Based on the 2010 Census of Population, it has a population of 2,533 residents.

Purely a residential enclave, Forbes Park is considered as one of the oldest villages in Makati. It famous landmarks include Sanctuario de San Antonio Parish and the commercial strip San Antonio Plaza Arcade. Inside the village, one will find the Manila Polo Club and the Manila Golf Club.

In the Middle of Two Central Business Districts

Forbes Park holds the distinction for being strategically located in the middle of two bustling and important business districts: the Makati CBD and Bonifacio Global City. As a result, many businessmen, diplomats, and expat employees of multinational corporations opt for a house and lot for sale in Forbes Park as their home in the Philippines. Although the village is in the middle of Makati, centuries-old acacia trees shield it from the noise coming from outside, giving the area a very tranquil ambiance. 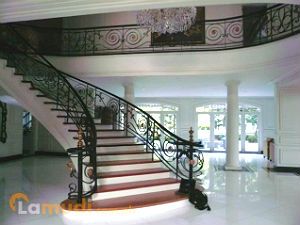 Real estate’s old adage, “location, location, location,” holds very true in the case of this gate neighborhood, as its very location alone ensures that every square inch of land in this enclave commands a premium price. In fact, a study conducted by Lamudi in 2014 found that the median price for a house for sale in Forbes Park stands at more than PHP 380 million—almost PHP 150 million more than the second most expensive subdivision in the Philippines, the neighboring Urdaneta Village. However, despite the very high price tags of properties here, it is still one of the most highly sought-after places in the Philippines to buy a home. Houses here are considered as very good investments as their value is assured to increase over time.

Find Other Properties in Forbes Park