Private Office with View for Rent in BGC by Common Ground

Private Office for Rent in BGC by Common Ground

Office for Rent in Exquadra Tower at Ortigas Business Centre

San Antonio, Pasig
Disasters are definitely unexpected and devastating. You can't foresee these natural catastrophes but you and your business can be ready for these. Keep your bu...
₱ 10,000
826 m²
Floor Area
View More Info Contact Agent
New Development
4

Also known as the National Capital Region, Metro Manila is comprised of one municipality and a total of sixteen cities. All are highly developed, and when combined, has a population that is the highest among the other regions in the Philippines. Thus, the region has a wealth of human resources.

The capital is also the center of commercial and financial activity in the country. Major government offices and financial institutions are located here, including the office of the president in downtown Manila, the trading floors of the Philippine Stock Exchange in the Makati CBD and Ortigas Center, not to mention the headquarters of homegrown corporations and local offices of some Fortune 500 companies. As Metro Manila accounts for more than a third of the Philippines’ gross domestic product and 12 percent of the country’s population, it is definitely an ideal place for businesses from all industries to hold their operations.

Establishing one’s enterprise in the Philippines’ capital region is easy because there is no lack of commercial space for rent in Metro Manila. Whether it is a warehouse in Quezon City, a commercial strip in Mandaluyong, or an entire floor in a skyscraper in Taguig or Makati, tenants would be hard-pressed not to find the space that would best suit their requirements.

There are also plenty of mixed-use or township projects currently under construction in the capital, which will further expand the amount of commercial real estate for rent in Metro Manila. Among these high-profile projects include the 72-hectare Arca South project of Ayala Land in Taguig, which when completed will be composed of residential, retail, office, and hotel segments. Then there is Megaworld’s McKinley West project also in Taguig (in front of the developer’s McKinley Hill development), which already has several campus-type office towers completed with several more in the pipeline over the next few years. Other large-scale mixed-use projects expected to shape Metro Manila’s commercial real estate include Vertis North in Quezon City, Circuit Makati, Alabang West, and South Park District, among many others.

Commercial Space for Rent in Manila

The choices are plenty for those who are looking for a commercial space for rent in Metro Manila. Warehouses are most common in areas like Pasig and Mandaluyong, as these cities are centrally located, and are generally the better places to make deliveries from. Cities such as Parañaque and Las Piñas in the south are close to the airport, making them the ideal locations for freight companies. Office spaces, on the other hand, are mostly available in business districts like the Makati CBD, Ortigas Center, and the Bonifacio Global City (BGC). These places are also home to some of Metro Manila’s best known shopping malls. 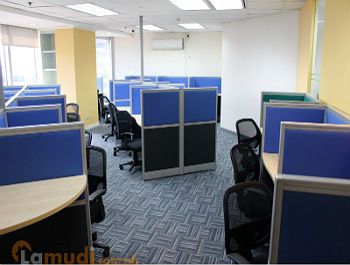 To give renters an idea on how much to expect, office buildings in Makati command high monthly square meter rates, depending on the type. Premium spaces go for PHP 930 to PHP 1,270, Grade A spaces cost PHP 650 to 985, and Grade B spaces are about PHP 515 to PHP 715, according to Colliers International. This means that a person looking for rent a 100 square meter office in a Premium building in the city, the monthly cost can range from PHP 93,000 to PHP 127,000.

When it comes to retail properties, Metro Manila most popular shopping districts are Ayala Center, Ortigas Center, and Bonifacio Global City. Rent here stands at PHP 1,385 and PHP 1,195 per square meter per month, respectively. A 200 square meter retail space in Ayala Center’s Glorietta and Greenbelt malls can command a monthly price of PHP 277,000, while a similar property in Ortigas Center, most notably in SM Megamall, Robinsons Galleria, and Shangri-La Plaza Mall, will cost about PHP 239,000 per month.

Office and retail are just two types of commercial properties available in Metro Manila. The Metro’s cities feature every available type of properties, so there is little limitation in choosing the city where one would prefer to rent from.