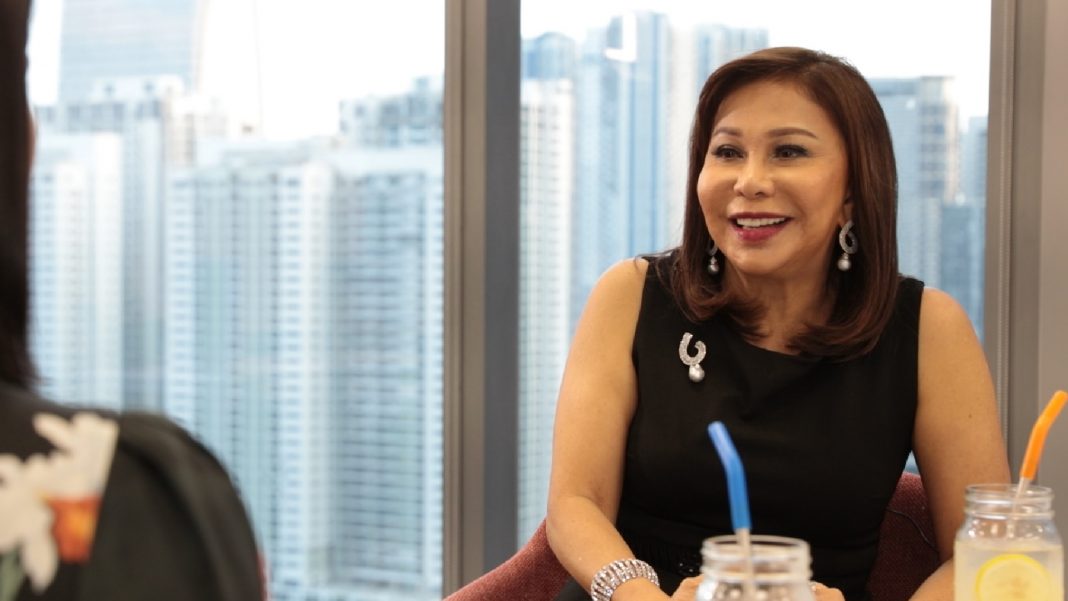 On the House is a series of casual interviews with Philippine real estate leaders about the stories behind their personas. Lamudi’s very own CEO, Bhavna Suresh hosts the dialogues over a drink or two. Watch the videos here on our platform or listen to the podcasts in Apple Podcast and Spotify.

Today’s guest is Emma Imperial, Group Chair and CEO at Imperial Homes Group of Companies. Emma has a zesty personality refreshing to many. Her sweetness shows in her continuous effort to develop solar solutions to low cost housing and elevate the lives of many Filipinos.

Famously known for their low-cost housing powered by solar-panels, Imperial Homes Corporation is a local real estate developer, headed by the formidable and passionate Emma Imperial. In another episode of On the House, Lamudi’s very own CEO, Bhavna Suresh, sat down with Emma Imperial over a glass of lemonade and talked about Emma’s own experiences, how Imperial Homes came to being, and improving the lives of Filipinos.

Bhavna started off the casual conversation by asking Emma what is the one question she’s tired of answering during interviews [0:55]. Without skipping a beat, Emma very graciously replied: “What is the Solar-Powered Community that you built?”

According to Emma, she never really tires of answering that one question. Each interview she attends presents her an opportunity to talk about the latest innovations and so she answers something new each time.

Imperial Homes Corporation’s first project is a solar-powered community – “a whole subdivision that has solar solutions inside,” as stated by Emma [1:47]. Simply put, solar-powered communities are a collection of houses each with solar panels that can power the house. The subdivisions are well-managed so much so that not one house is above others – quite literally and figuratively. Emma also proudly added that each household saves up to 31% of their usual expenses because of their low-cost housing and solar-powered solutions.

When asked about the existing knowledge gap about sustainability practices, Emma said that very few understand the cost and returns of sustainability solutions [3:28]. The common misconception, according to her, is that solar solutions are an added cost. The investment costs of adding solar panels are actually offset by lower electricity bills.

Another obstacle Emma stated is that terminologies are quite hard to understand [4:15]. Terms like “wattage” and “kilowatt-hour” wouldn’t be comprehensible to ordinary people like the common housewife. She shared that the only time she started learning about the technicalities of solar solutions was when she decided to put some on her own home. Emma also casually mentioned accessibility is also a problem and that people are trying to reach Imperial Homes and ask them via Facebook whether they do solar solutions in a particular area [5:32].

With the research done and data collected by Imperial Homes on their homeowners, they found that their lifestyles have improved [5:57]. From having small appliances to save up on electricity costs, most of their homeowners are now able to buy bigger ones since they no longer worry about high electricity bills.

What was unexpected, however, as Emma said, was through their low-cost housing and solar solutions, women are now empowered to start their own businesses [6:56]. Of 46 housewives interviewed by Imperial homes, they found out that 21% have ventured into home-based businesses. One woman, she shared, made around Php60,000 a month for catering services. Because of cheaper housing and electric bills, women now worry less about financial struggles at home, and can now focus on their self-development and even become micro-entrepreneurs.

Also adding to what Emma recounted as the benefits of venturing into this niche real estate market, is that students get to study more [8:31]. Apparently, when electricity costs are higher, parents discourage their children to study because of their need to use power for lights and other fixtures.

When Bhavna asked why solar, Emma recalled her early career [9:05]. While still a young girl of about 6 or 7, she’d buy and sell toys to her classmates, until her teachers reprimanded her for it. Years later, she had a sales job selling heavy equipment, where she was the only woman and the top-performing salesperson.  There, she met her now-husband, then mayor of Legazpi City, and that was when she stopped her career in sales. Shortly after, she moved to Bicol where she put up the first poultry farm and first Montessori in the area, and then she ventured into real estate.

“Why can’t I put solar in my small houses?” she asked herself after coming back home from a trip to Europe 6 years ago with her Danish friend [11:53]. Soon, she and a friend partnered to make solar solutions in low-cost housing in the Philippines happen. Emma bought the company after a while but credits her friend for bringing in the technology and for making it affordable for low to middle-income families.

Towards the end, Emma shares with Bhavna a piece of advice given to her by the late business tycoon, Henry Sy [14:44]. She says the secret is how you know people and observe them. She says that is a skill that you have to practice and work on, and that you have to seek validation of your judgments with your friends. By doing this, you’d know from the get-go whether or not you’d shake a person’s a hand. Emma says that this piece of advice has stayed with her for so long because it had the greatest impact on her, and she’s never been fooled because of this valuable skill.

A piece of advice from the talk: sometimes you make mistakes relying solely on gutfeel, so keep learning and practicing.

Own a Home in Six Months: Top Location Picks

Your Next Best Investment? A Condo in Metro South

Homeowner or Lessor? A Millennial Can Be Both at 202 Peaklane