Abreeza Residence, J.P. Laurel, Davao City Barangay 20-B, Davao
This is a 92 square meters condo unit situated at the very heart of the city in a mall area. Abreeza Residence is one of the best condo complex in the city and with its very own amenities to enjoy from gym, function room to celebrate your private occassion, well maintaned swimming pool, very accomodating staff from reception to housekeeping and enjoy a well guarded condo complex but you will be amazed this condomnium that we offer for lease. This is a 92 square meters floor size condo unit with a very own big balcony, a bedroom, toilet and bath with modern kitchen facilities and service area within your own unit. See for yourself !
₱ 55,000
1
Bedroom
1
Bath
92 m²
Floor area
View More Info
Contact Agent

2 Bedroom Condo in the center of Davao Downtown

J.P Laurel Bajada Barangay 20-B, Davao
A very quaint, well thought off apartment space. The whole area has been divided beautifully to make you feel like you're in a New York apartment, with natural light coming through the big window hitting all corners of the unit. Sleeping area - A half glass divider has been installed to provide privacy in the sleeping area. There's a huge 47" flat screen smart TV that's rotatable 180 degrees so you can watch Netflix from anywhere in the apartment. Bathroom - This space has been completely renovated with marble-like tiles and a huge mirrored storage cabinet. Kitchen - This area features a multi-point induction stove with a microwave, rice cooker, and a big 2-door refrigerator with a smart outdoor adjustable temperature setting. Living area - This area has been designed to have a relaxing feel with complete dimmable lights to set your mood. Witty artwork and smart storage are also strategically placed around the area. Foyer - The entrance hall will provide privacy before entering the living area. This space has also been improved by adding a hanger rack and a shoe cabinet for tidy, easy and convenient storage.
₱ 25,000
1
Bedroom
1
Bath
33 m²
Floor area
View More Info
Contact Agent

Barangay 34-D, Davao
A corner 2 bedrooms condo unit is for RENT at Avida Tower 1.It has a floor area of 58.5 sqm. The master's bedrooms has its own toilet and bath and a common toilet and bath outside. A full glass panoramic view facing to Davao gulf, Samal Island, City view and a partial view of the mountain range. This condo unit is brand new and located at 19th floor unit 06 at Avida Tower. It is well interiored semi furnished. Long term lease only minimum of 6 months. You mar call us if interested.Landmarks:Marco Polo Hotel and Ateneo de Davao  - 650 mAbreeza Mall  - 2.5 kmDavao City Hall  - 1.8 kmSan Pedro Cathedral  - 1.6 km
₱ 25,000
2
Bedrooms
2
Baths
58 m²
Floor area
View More Info
Contact Agent

Barangay 34-D, Davao
The neighborhood. Unit 1615 in Avida Towers Davao is a high rise condominium studio type unit located right in the heart of the city business district. It is a few walks away from prime locations like Marco Polo Hotel, Ateneo de Davao University, Aldevinco Shopping Center, the iconic Roxas Night Market, People’s Park, San Pedro Cathedral and Davao City Hall. The view. The place gives you a cozy, romantic feel while looking at the breathtaking view of Davao skyline from the 16th floor. The room. It is a fully airconditioned studio type unit that can accommodate upto 4 guests. It has 2 double beds (including pullout). Guests can avail of the FREE Wifi, coffee and tea, bottled waters, bathroom towels, shampoo, conditioner, bath soap. There is a fully equipped ktichenette that allows guests to cook their own food. The hot/cold shower is perfect for soothing aching muscles. The pool. You can have unlimited access to an outdoor swimming pool located on the ground floor of the building.  Safety. The building has a 24-hour security who ensures residents’ safety.
₱ 18,000
1
Bedroom
1
Bath
22 m²
Floor area
View More Info
Contact Agent

Philippines, Davao City, Buhangin Pob., Porras St Barangay 15-B, Davao
INCLUDED SERVICES IN THE PRICEAs a tenant, you have the exclusive use of the property and its facilities. The condo complexes usually share swimming pools, fitness room, basketball court, outdoor grill, etc. You will have access to all the facilities, but it will not be at your group’s private use. However, the tenant is allowed to have max. of 3 guests to use the facilities for free. Other guests and home owners that are staying in other units will also have access to the facilities.EXCLUDED SERVICES IN THE PRICEThe following services are excluded in the price:Consumption of electricity, A/Cs, water, gas tank refills, wifi (Php1700/month), cable tvBath towels and ToiletriesCleaning servicesSecurity Deposit will be refundable at the end of your stay less expenses for breakages, damages or losses, if any, and pending utility billsShort term rental: Php 16,000/- with 10k security depositthank you.
₱ 16,000
1
Bedroom
1
Bath
27 m²
Floor area
View More Info
Contact Agent

J.P. Laurel,Bajada,Davao City Barangay 20-B, Davao
This is a 31 square meter Studio unit located at the Abreeza Place, Located adjacent to the newest mall in Davao, Abreeza which is located at the heart of the city. The Tower has complete amenities from swimming pool, clubhouse, gym facilities and function rooms. This is available anytime with parking slot.
₱ 20,000
1
Bedroom
1
Bath
31 m²
Floor area
View More Info
Contact Agent

J.P. Laurel Ave, Bajada, Davao City, Davao del Sur Barangay 19-B, Davao
The property is located at the heart of the city and has easy access to Public transports, Schools, Hospitals, Malls, Stores, Airport, Restaurants, and etc. It has a countryside ambience because of the pine trees that surrounds the vicinity which also provides refreshing air and a quiet atmosphere. The condominium unit is located on the 3rd floor at Bldg. 4 (Liverpool). Elevator is operational. It is fully furnished with free wifi, free use of pool and gym. Strictly, No Smoking and No Pets Allowed! For more details or questions, look for Lanie.
Contact agent for price
2
Bedrooms
1
Bath
43 m²
Floor area
View More Info
Contact Agent

Dona Pilar Road, Sasa, Davao City Sasa, Davao
I would like to present a brand new fully furnished studio-type apartment situated in the heart of the city; close to the airport, church, gyms, malls, hotels, hospitals, schools and if you want a weekend away, the place is a 10-minute walk to the jetty to Paradise Island. The area is secured, has a car space, hot water, kitchen cupboard and storage space and a swimming pool to those who want to unwind after a day's work. The place has screens on windows and door to the veranda allowing occupants to get some fresh air when the weather cools down. It is ‘homey’ and accessible to everything. We require a minimum lease of three months, and renewable monthly thereafter.
₱ 18,000
1
Bedroom
1
Bath
30 m²
Floor area
View More Info
Contact Agent

Barangay 19-B, Davao
A beautiful french inspired furnished 2 bedroom condominium probably the best in town open for long term rent. Property is situated in the heart of the city just a 650 meters from Abreeza mall and about  3 kms from SM lanang with close proximity to the airport. This property is fully furnished with hot and cold water. High preference for long term renter minimum 1 year lease and up. Please direct message me for inquiry and viewing schedule. Special discount for long term renter.
₱ 30,000
2
Bedrooms
1
Bath
121 m²
Floor area
View More Info
Contact Agent

Barangay 15-B, Davao
For Rent 2 Bedroom Furnished unit at Linmarr Towers, with BalconyFloor area: 52.21 sqmThis unit is for open for rent at P 33,000 per month for Short Term contract, or P 30,000 per month for 1 year contract. A deposit of 2 months and 1 month advance is required for long term rental. While 1 month deposit and 1 month advance is required for short term rental.Free use of amenities: swimming pool and gym. Rate is inclusivemonthly dues, exclusive of light and water bills. Location is veryaccessible to Gaisano Mall, Victoria Plaza, Abreeza Mall, Cafe's andrestaurants with only 2 to 4 minutes travel.
₱ 30,000
2
Bedrooms
1
Bath
52 m²
Floor area
View More Info
Contact Agent

2Bedroom, 2 Bathroom with own laundy and balcony for rent at Matina Enclaves

Situated in Region XI in the southeastern part of the Mindanao region is a scenic and colorful province called Davao Del Sur. Encompassing a land area of 787.45 square miles and a population of 574,910, this province is a known tourist destination because of its natural wonders, including beaches and mountains, rich traditions, and culture.

This quaint province used to be a part of the highly urbanized Davao City until the year 1962, when the Philippine Congress decided to divide Davao into three parts:

As it stands, Davao Del Sur is now a thriving metropolis with plenty of business hubs, commercial areas, and residential developments. It’s one of the most sought-after places to live in, with a condo for rent in Davao being among the most desirable properties on the market.

THE WONDERS OF DAVAO DEL SUR

Many local and foreign visitors alike seek out a condo for rent in Davao Del Sur, in particular,  because of its stunning natural sights and rich culture. Before the colonial times, several ethnic groups could be found in the rugged mountains and hills surrounding the province.

The Bagobos, an ethnic group situated in the mountains and considered as one of the largest tribes in Davao del Sur, still continues to reside in the province. The Tibolo Village, which is a community filled with the Bagobo people, is a popular tourist attraction since it introduces to visitors the undiscovered Bagobo history, tradition, and culture. 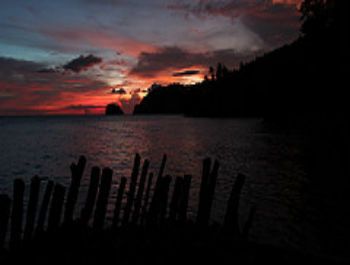 Another tourist destination is the famous Mount Apo. This mountain-slash-volcano is the country’s highest peak, making it popular with hikers and mountaineers. The towering mountain is also home to hundreds of bird species, including the critically endangered Philippine Eagle, the country’s national bird. The Mount Apo area has been declared by the Philippine government as a Nature Park.

WHY RENT A CONDOMINIUM IN DAVAO DEL SUR?

This province is brimming with possibilities, mainly because it is a popular tourist attraction and an alternative area for investment. You won’t have difficulty finding a prime condo for rent in Davao since there’s a substantial market for rental properties. The majority of the province still relies on agriculture as a source of income, and several key players from major industries and establishments are seeing Davao Del Sur as an ideal place for business and commercial ventures, particularly real estate developers and investors who are taking advantage of the considerable market for rental properties such as a condo for rent in Davao.

Finding options for a condo for rent in Davao is definitely going to be even more effortless than it already is as the province is seen to be progressing towards urbanization.

Is there a studio condo for rent in Davao?

Yes, there are 38 studio condos for rent in Davao. A studio condo is ideal if you’re a single person, a young professional, or a student.

Is there a condo for rent in Davao with a gym?

Yes, there are 48 condos for rent in Davao with a gym. Gyms are a common amenity included in most condominium complexes.

What is the average price for a condo for rent in Davao?

The average price for a condo is between Php 15,000 and Php 25,000. For this price, you can get a conveniently located and comfortable condo unit that accommodates all your needs.

Find Other Properties in Davao