Lot For Sale in Lapu-Lapu, Cebu

Commercial lot only for sale in Lapu-lapu City, Cebu Philippines

Subabasbas, Lapu-Lapu
Commercial land for sale in suba basbas Lapu_lapu city.  Ideal for warehouse, display center, bodega. Wide frontage with 40 meters, along barangay road. Nearby establishments. Nearby to 3rd bridge of Cordova cebu. Accessible to 1st bridge as well. In which Cordova "CCLEX" highway connecting to Cebu City bridge is now open Inaugurated by Pres. Duterte. The lot area is as is where-is. Must see to appreciate. Price net of all  taxes and transfer fees.
₱ 12,500,000
2359 m²
Land Size
01/10/2021
Available From
View Info
Contact Agent Maribago, Lapu-Lapu
1,099 Sqm of Filled Vacant Lot Just Beside Aldea Del Sol. Beside a Nice Subdivision. Perfect for Residential Pojects, Near the Lapu Lapu Airport. near Various Resorts and the Third Bridge which is to be opened soon. Price is 15,000 per SQM Net. Negotiable, open to term payment Land property for sale in Maribago, Lapu-Lapu, Cebu
₱ 16,485,000
1099 m²
Land Size
21/10/2021
Available From
View Info
Contact Agent

Sienna May Pepito
MEMBER SINCE 2019
4

Marigondon, Lapu-Lapu
Vacant Lot along Basak-Marigondon Road, 4,300 sq.m. near Saekyung Village Sale Vacant lot for sale near Saekyung condominium, ideal for mixed commercial residential use. The nearest landmark is Saekyung Village, Marigondon, Lapu-Lapu City. Plantation Bay Hotel and Resort and beach resorts are within a few minutes of travel by car. Best use for medium to high rise condominium, retail outlet, car or truck garage, warehouse for storage, automotive repair shop, gasoline station, convenience store with a car wash and laundry service, and many more. Experience an exceptional Condominium lifestyle at the heart of Marigondon Saekyung Condominium is a Condominium in Lapu-Lapu, one of the top cities in Cebu. Saekyung Condominium provides its residents with a lifestyle of privilege that many people can only dream of. Saekyung Condominium is yet again breaking the boundaries of residential living by bringing comfort and affordability, ensuring residents live the life they deserve as they create more amazing memories with their families. These makes getting a unit at Saekyung Condominium worth every cent. Properties within Lapu-Lapu area are quite strategically-located that's why owning a Condominium is a worthwhile investment one can mak A willing seller is open to a serious buyer’s counteroffer. For more details, call now.  Lot Details: Lot Area: 4,300 sq.m. Frontage: 46 meters Clean Title Updated: Jan. 2022 .
₱ 107,500,000
4300 m²
Land Size
04/05/2022
Available From
View Info
Contact Agent

Mactan, Lapu-Lapu
FOR SALE: Prime lot along  Mactan Circumferential Road, just a kilometer and a half away from MACTAN NEWTOWN. This property is ideal for an I.T. or a cyber-business complex, or a residential condominium, a condo-hotel, or any vertical development project. This is a titled property and it  has no informal settlers. The entire area is already fenced. LOT AREA: 11,880 sq.m. (composed of  4 lot titles) MAIN ROAD FRONTAGE: 10 meters for driveway DISTANCE FROM  MACTAN NEWTOWN: 1.5 kilometers [approximate] LOT TERRAIN: front lot is flat and the back lot is a little bit elevated compared to that of the road SELLING  PRICE: Php32k/sq.m. or Php 380,160,000 SALE TRANSACTION: (Buyer pays the transfer expense and documentary stamps tax. Seller pays the capital gains tax, notarial fee, and broker's fee.) For inquiries and assistance, please contact: MARIQUITA "KETS" L. BOLIGOL Licensed Real Estate Broker License # 0005770 Leuterio Realty and Brokerage Cebu City
₱ 380,160,000
11880 m²
Land Size
13/04/2022
Available From
View Info
Contact Agent

Agus, Lapu-Lapu
VILLAS MAGALLANES ESTATES offers Lapu lapu City lot for sale Villas Magallanes gives you the opportunity to live a tourist’s life in a place you can call your home. This master-planned estate follows the island’s theme of elegance with its landscaped gate that welcomes you to the good life. You will enjoy the convenience and exclusivity from its first-class amenities such as Country Clubhouse that houses everything from function room to basketball court, swimming pool to playground. Villas Magallanes Estates is developed by Sta. Lucia Realty located on walking distance to Gaisano Grand Mall and Mactan Doctor’s Hospital. Famous beach resorts such as the Jpark Island Resort, Maribago Blue Waters, Tambuli, and many more are only less than 10 minutes drive away. Features & Amenities: Villas Magallanes Lapu lapu City lot for sale Landscaped      Entrance Gate with Guardhouse Perimeter Wall Country      Clubhouse 10-12 meter-wide      Concrete Roads Paved Sidewalks Concrete Curbs      and Gutters Concrete      Electrical Posts with Lamps Complete      Electrical Facilities Centralized      Interrelated Water System Underground      Drainage System Clubhouse Covered      Basketball Court Function Room Swimming Pool Locker and      Shower Rooms for Men and Women Open Tennis      Courts Playground Ample Parking      Area Important Note: All facilities and amenities especially water, electricity, swimming pool, clubhouse, and security are very well maintained by the developer Sta. Lucia Development Corp. The developer is committed to maintain all facilities and security inside Villas Magallanes Estates regardless of the number of homeowners in the Village. Lot owners will just  pay 1 peso per square meter per month while the homeowners will just ay 3 pesos per square meter per month for the association due. The developer’s commitment for the long term maintenance of Villas Magallanes Estates assures every lot owner / investor a constant appreciation value of his/her property in this Village.
₱ 2,500,000
188 m²
Land Size
02/09/2021
Available From
View Info
Contact Agent

Gracefully Welcoming Visitors to the Province of Cebu 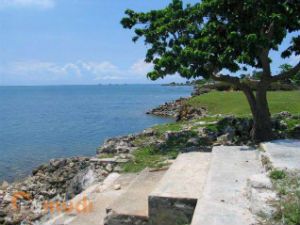 The name “Lapu-Lapu City” often reminds one of either the expensive sea bass or the Visayan chieftain who first resisted Spanish colonization. Beyond its name, it is a gem to behold, and you’ll definitely get your money’s worth when you buy a lot for sale in Lapu-Lapu. Formerly named Opon, Lapu-Lapu City is located on Mactan Island and is connected to the rest of Cebu Province via the old Mactan-Mandaue Bridge and the Marcelo Fernan Bridge.

Lapu-Lapu City is where the Mactan-Cebu International Airport, the second busiest airport in the Philippines and the main port of entry to the Visayas, is located. Being the gateway to Cebu and to the rest of the Visayas, the city government has put in great effort to ensure that their city will never be forgotten.

The city is also home to some of the best beach resorts in the province with the majority having white sand beaches. Once you are tired of laying around on the sand and sunbathing, you can literally swim with fish, as the resorts also offer scuba diving and snorkeling equipment, and even lessons. Another popular activity is touring the sea through a private pump boat while enjoying on-board cooked meals and the magnificent surroundings.

As a highly urbanized city, Lapu-Lapu hosts many urban amenities, including convenience stores, restaurants, and shopping malls. The most notable of these is the Gaisano Grand Mactan Mall. The Gaisano brand, which is famous in Visayas and Mindanao, has stalls and facilities that rival Metro Manila’s major retail players. An alternative to the Gaisano Grand Mactan Mall is Marina Mall, which houses several Asian-themed restaurants and a number of unique stores. Also located in Lapu-Lapu is Shangs Island Town Center, which is famous for its nice ambiance and its rich selection of restaurants.

Lapu-Lapu City, with its natural beauty, tropical island lifestyle, and location in one of the fastest-growing regions of the country, thus a lot for sale in Lapu-Lapu is a worthwhile purchase.

There are plenty of options for a lot for sale in Lapu Lapu City awaiting investors. Whether to be used for business or a place to build a home, the city is certainly a smart choice to buy land. Its most promising asset? The view, of course, since the city received a portion of Cebu’s overall natural beauty. One good example is a beach lot in Punta Engano, which offers

With its large population, highly urbanized areas, and high income, Metro Cebu has all the makings of a dynamic and cosmopolitan metropolis, and Lapu-Lapu City as a part of it, will soon receive an influx of land buyers. Do not get left behind, consider purchasing an available lot for sale in Lapu Lapu City as soon as possible.

Is there a commercial lot for sale in Lapu-Lapu?

Yes, there are 53 commercial lots for sale in Lapu-Lapu. Lapu-Lapu has plenty of thriving commercial structures in its midst, so you’ll be in good company when you set up your own on a prime commercial lot here.

Is there a residential lot for sale in Lapu-Lapu?

Yes, there are 157 residential lots for sale in Lapu-Lapu. If you want to settle down in a peaceful neighborhood with plenty of nature surrounding you, then Lapu-Lapu is the perfect place for you.

Is there a foreclosed lot for sale in Lapu-Lapu?

Yes, there are 72 foreclosed lots for sale in Lapu-Lapu. You can make the most of your investment with a foreclosed lot since these affordable pieces of land are sold below market value.