House and lot For Rent in Lapu-Lapu, Cebu Maribago, Lapu-Lapu
The residential community has easy accesst to major facilities and establishments including hospitals, airport, restaurants, shopping malls, industrial zones, schools, churches and beach resorts in Mactan while still being close within the comforts of the city. The area is surrounded by beautiful beach resorts, a popular destination for beach lovers and is known as the hub for jet skiing, snorkeling, diving, parasailing, banana boat riding and other sea activities.
₱ 40,000
3
Bedrooms
90 m²
Floor area
181 m²
Land Size
View Info
Contact Agent

Maribago, Lapu-Lapu
Astele is a sanctuary where the therapeutic breeze of the nearby ocean calms your being.A modern community nestled in the vibrant island of Mactan, Astele is surrounded with beautiful world-class beach resorts – a vacation is never too far away.A master planned community that is comprised of well-designed amenities that enhance the quality of living in this exclusive gated subdivision. A lifestyle that possesses the tasteful Asian Contemporary minimalism is reflected in the clean façade that maximizes the use of natural elements.All the things that make Astele a coveted community is the promise of a well balanced life between serenity and vitality.
₱ 60,000
3
Bedrooms
133 m²
Floor area
150 m²
Land Size
View Info
Contact Agent

2 Bedrooms House For Rent near Mactan Airport in Mactan Cebu

Basak, Lapu-Lapu
- located in TPI Homes II, General Aviation Rd, Basak, Lapu-Lapu City (in front of hangar) - this is a gated subdivision with 24 hr security - this is a single house, not a townhouse so there's a lot of windows for natural light and cross ventilation - house consists of 2 units: one unit on the main floor, another unit on the 2nd floor Note: Ground floor unit is already rented. Only 2nd floor unit is availabe - there's separate submeters for electricity and water for each unit - each unit has 2 bedrooms, kitchen, CR, living and dining area and its own main door and gate - has separate laundry areas  - rent is P8,000 per unit - walking distance to Indiana Aerospace University, Gaisano Grand Mall, Mactan Doctor's Hospital - MEPZ 2 and 3 are just 10 mins drive - popular beach resorts such as Mactan Shangrila, Bluewaters, etc are just a short drive away - pls send me a message thru Lamudi or contact Riz Velasco. Salamat daan.
₱ 8,000
2
Bedrooms
45 m²
Floor area
100 m²
Land Size
View Info
Contact Agent

Bankal, Lapu-Lapu
Portville Subdivision is located in Buaya, Lapu-Lapu City, Mactan Island. The location is about two to three minutes to all major business establishments like Cebu International Airport, Marina Mall, Mactan Grand Mall, MEPZ and five to ten minutes to Mactan Doctor’s Hospital, Churches, Beaches and some known class hotels and resorts. Near Mactan Airport & Bigfoot New semi furnished two storey townhouse is located very near to the guardhouse. This is a quite home in a beautiful neighborhood. Convenient to everything. Floor area : 70 square meter Lot area : 42 square meter Two Bedrooms Semi Furnished Apartment One Toilet and Bath One Carport - Laundry area - Master's bedroom with new aircon and spacious wardrobes - Provision of stove for cooking - New TV and new refrigerator - New Queen size bed and single bed Term is minimum of 6 months but renewable. 1 month advance rental and 1 month deposit. The 1 month advance rental is applied on the 1st month of the term of the contract. Monthly rental is ₱ 15K. Lessee will be the one to pay for the power, water and assoc due.
₱ 20,000
2
Bedrooms
70 m²
Floor area
42 m²
Land Size
View Info
Contact Agent

4 Bedroom House for Rent in White Sands Subdivision in Mactan

House for Rent? Lapu Lapu Is a Beautiful Choice

For lovers of Philippine history as well as professionals and families who work in Metro Cebu, a house and lot for rent in Lapu Lapu is a beautiful and convenient choice as a place to live in. Its unique combination of urban convenience and natural beauty often inspires residents to start renting or buying homes in the city.

Lapu Lapu, a highly urbanized, first-class city on Mactan Island, is an important center of Philippine history and culture. It was named after the chieftain Lapu Lapu, who set the Spanish invasion led by Ferdinand Magellan back by more than 50 years after defeating him at the Battle of Mactan. The city is now home to the Mactan Shrine, which is made up of a bronze statue of the first national hero and a monument to Magellan. Both are important national landmarks.

Today, the city has approximately 350,000 people (as of 2010) and is a major part of the Metro Cebu Area with the majority situated on the neighboring Cebu Island. The city is connected to the rest of the metro area across the Mactan Channel via the Marcelo Fernan and Osmeña bridges. It also has access to the metro area via ferries that operate between Cebu and the city’s downtown areas.

Popular Areas in the City 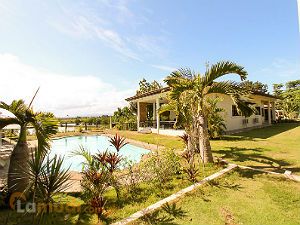 With 30 barangays where you can search for a house and lot for rent in Lapu Lapu City, the area does not come up short on options. Many barangays feature beaches and resorts, which make them attractive to residents and tourists alike. Below is a selection of some of the city’s popular barangays.

Agus - a barangay situated on the southeastern side of the city, which contains the Hilutungan Channel. Barangay Agus has many gated communities, such as the Bayswater subdivision and many resorts, including Hadsan Cove Resort and the Imperial Palace Waterpark Resort & Spa. This is a beautiful area to find a house and lot for rent in Lapu Lapu City or even a house with a rent-to-own scheme.

Basak - a barangay situated between the southeastern coastal areas, the Mactan-Cebu International Airport, and downtown Lapu-Lapu. Barangay Basak includes the Happy Homes subdivision, the Cebu Light Industrial Park, the Mactan Doctor’s Hospital, and the Gaisano Mall. It’s definitely a very convenient and accessible place to find a house and lot for rent in Lapu Lapu.

Mactan - a barangay in the northeastern part of the island, this is an ideal location to find a beach house and lot for rent in Lapu Lapu. It features the Mactan Shrine along Punta Engaño Road, the Shangri-La Resort and Spa, and Mactan Newtown, a residential development by Megaworld.