Sort by:
Switch to Map View

Apartment for sale at Basco, Batanes

Batinguel, Dumaguete
Apartment For Sale in Dumaguete City  ID 14701 This is a 3 unit apartment for sale in Dumaguete City. Two of the units have two bedrooms and one toilet and bath with open concept dining/kitchen and living area. The other unit is a studio type. Each unit has 40sqm floor area. The back area outside still has a little space where you can do laundry and some gardening which is approximately 15sqm. The whole 3unit apartment is fully fenced with gate. Each unit has its own gate. Located on the left side of the whole area is a common parking space with roof. All units been rented and a good income generating place. This property is just about 50meters from the paved barangay road with secure road access. Lot area: 312sqm Price: 3,950,000.00 Location: Batinguel, Dumaguete City
₱ 3,950,000
4
Bedrooms
2
Baths
40 m²
Floor area
View More Info
Contact Agent

Seafront Residences in Batangas Calubcub II, San Juan
Seafront Apartment Villas are now open for sale. Walking distance to the beach. 1Br flat with an area of 45 sqm and 2BR garden unit with 52 sqm. Located in San Juan, Batangas 2.5 to 3 hours distance from Metro Manila. Prices ranging from 6.8 to 8.4 M. Payable in Cash or installment. The Seafront Villas is a collection of low rise condominium in a master-planned community overlooking the serene waters of Tayabas Bay and the slopes of mystical Mount Banahaw, It is the perfect location for vacationers looking for a place close to the sea but still with a private and homey atmosphere. Here at the Seafront Villas you have the option to invest in a one-bedroom with balcony or a two-bedroom garden unit located just a short walk away from the beach. The Seafront Villas will make a perfect income generating properties that you can list as vacation rentals online.. House and Lot are still available. payable in Cash or Installment. Hurry!!! invest now before price increase.
₱ 7,072,000
1
Bedroom
1
Bath
45 m²
Floor area
View More Info
Contact Agent

Socorro, Quezon City
The 7 Door Apartment is good for investment and has passive income.  Market value on the location of the property increase every year.  Rental income per month is Php 150,000.00.
₱ 28,000,000
4
Bedrooms
View More Info
Contact Agent

PL# (12507) FOR SALE ! 2-Storey Residential/Apartment building in Makati near BG

Apas Lahug Cebu City Lahug, Cebu
TOWNHOUSES walking distance ra sa IT Park. Right at the back of Avida Riala..Currently used as staff house in one of establishment which he owned. This can be converted to or readily set up as apartment so it generate an income asap to the buyer. complete details as below  Lot area: 95 sqm  Floor area: 120 sqm  10 Bedrooms  6 Toilet and Bath   * All rooms comes with cabinet, 1 small table set with 2 chairs and most rooms split type aircon   * Each room has its own electric meter  * Each room is Key Card so it like Hotel set up   * Foreigners can buy since this is Condominium Cert of Title.   * Prices is inclusive of Capital Gain Tax
₱ 6,500,000
10
Bedrooms
6
Baths
120 m²
Floor area
View More Info
Contact Agent

Block 6 Lot 6 Villa De Oro Subdivision Tagapo Sta.Rosa Laguna Tagapo, Santa Rosa
Villa Residencia offers a relaxing,covinient, and most affordable studio type for rent nearby S.M Sta.Rosa and Robinsons Sta.Rosa and other Landmarks like Paseo De Sta.Rosa, Enchanted Kingdom, Nuvali and other establishments near Tagapo Sta.Rosa.Villa Residencia has an 8 most affordable studio type for rent located at well secured and beautiful Villa De Oro Subdivision Tagapo Sta.Rosa Laguna.One nice thing about Villa residensia is the location,it is actually near S.M Sta.Rosa and Robinson's Sta.Rosa where you can regularly experience the unhassle lifestyle at the comfort of your place. You can easily reach South Luzon Expressway Toll Gate less than 20minutes,so traffic is not a problem.Going to alabang less than 30 minutes.You will reach Makati Commercial Center for less than 1 hour. Tagaytay for less than 30 minutes and other famous beaches and springs located in Laguna and Batangas.
₱ 5,500,000
8
Bedrooms
308 m²
Floor area
View More Info
Contact Agent

Dau, Mabalacat
This beautiful brand new apartment complex is located in Dau Mabalacat City Pampanga Very near Dau Mabalacat Bus Station Walking distance to Jollibee, McDonald's, Pure Gold, Jumbo Jenra, Banks, schools, clinics, gym, and many popular establishments. walking distance to McArthur Highway, and accessible to public transportation round the clock. the property has a land area of 179 square meters CORNER LOT. There are 2 buildings in this apartment complex both 2 storeys. Each unit is about 35 square meters studio, with own electricity and water meter. Building was completed November 2020, BRAND NEW! Potential Rental income: ₱ 4,500 per month per unit. With open space in the middle as common area or parking that can fit 2 big cars. With another open space in the property of about 30 square meters for additional parking or common area or future developments. All these goodness for only ₱ 10.5M! Reason for selling, owner is already abroad.  For viewing please schedule at least 1 day in advanced to give due courtesy to the caretaker. Thank you for your understanding.
₱ 10,500,000
12
Bedrooms
12
Baths
360 m²
Floor area
View More Info
Contact Agent

The Philippines Is Perfect for Buyers

As of 2015, the Philippines has been continuously enjoying over 6% growth across a variety of industries, including the real estate sector. The nation has one of the fastest growing economies in Asia, and has seen a steady rise in investment from domestic and international players. Much of this investment has been focused on the development of infrastructure, which has also had a positive impact on real estate.

Whether as an end-user or as an investor, now is the time to buy properties in the Philippines because of the stable economic climate. In spite of politics, which has never been the country’s strongest suit, the past couple of years have seen much emphasis on transparency, and support on local and foreign investments has been unwavering. The real estate business in particular has also been consistent since 2011 with top developers successfully launching projects from mass housing to luxury properties.

In spite of the disparity between demand and supply, much opportunity is presented to potential buyers from new developments to low interest rates on housing loans. Internationally inspired in terms of design and standards, property types, especially condominiums and apartments are reaching a new level of quality and value for your money. All these create a lucrative environment for property investments that is expected to only appreciate in the next coming years.

Apartments for Sale in the Capital Region

The National Capital Region, more known as Metro Manila, is not only the capital of the Philippines, but also its center of trade and commerce. With a population of around twelve million, it comes as no surprise that many real estate developments are centered here, especially in the employment areas of the Makati Central Business District, Bonifacio Global City, Eastwood City, and Ortigas Center. The average price of apartments for sale in the most popular areas are as follows:

Naturally, the more popular the neighborhood, the higher the price. However, prices are still highly dependent on the total size of the apartment, as well as the facilities and amenities available to the residents. The same variation in price can be seen when it comes to flats for rent.

Other Important Locations in the Philippines 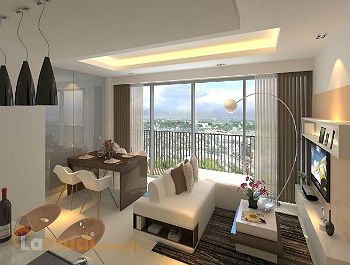 Modern infrastructure, better roads, improved urban planning, and an increase in commercial and retail facilities are paving the way for investors to refocus their sights outside the capital. The government as well as private developers are also making sure that areas outside Metro Manila are becoming livable environments by building providing more residential options. For example, in Cavite, the most popular cities are Tagaytay, Imus, and Bacoor where apartments range from PHP 800,000 all the way up to PHP 29 million for two bedrooms. In Visayan cities, such as Cebu and Mandaue, a two-bedroom apartment ranges from approximately PHP 1.5 million to PHP 13.5 million.

There will always be many options when it comes to an apartment for sale in the Philippines. Whether one chooses to buy a unit in the capital or in other progressive and developing cities, the opportunities for finding your new home is endless. There will not be a lack of apartments for sale, especially in the years to come.

Find other properties in Philippines